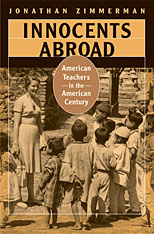 Protestant missionaries in Latin America. Colonial "civilizers" in the Pacific. Peace Corps Volunteers in Africa. Since the 1890s, thousands of American teachers--mostly young, white, middle-class, and inexperienced--have fanned out across the globe. Innocents Abroad tells the story of what they intended to teach and what lessons they learned.

Drawing on extensive archives of the teachers' letters and diaries, as well as more recent accounts, Jonathan Zimmerman argues that until the early twentieth century, the teachers assumed their own superiority; they sought to bring civilization, Protestantism, and soap to their host countries. But by the mid-twentieth century, as teachers borrowed the concept of "culture" from influential anthropologists, they became far more self-questioning about their ethical and social assumptions, their educational theories, and the complexity of their role in a foreign society.

Filled with anecdotes and dilemmas--often funny, always vivid--Zimmerman's narrative explores the teachers' shifting attitudes about their country and themselves, in a world that was more unexpected and unsettling than they could have imagined.


This charming history of the missionaries, Peace Corps volunteers, and other idealists who taught in the four corners of the world over the past 100 years is billed by the author and publisher as an examination of our shifting understanding of "culture"...For readers interested in education, though, it offers an even more delicious treat: countless scenes of progressive teachers thwarted in their efforts to export dubious ideas.
-- Education Next


In Innocents Abroad, Jonathan Zimmerman provides both an important contribution to historical scholarship and a fascinating glimpse at the lives of a unique group of Americans. This book examines Americans in the twentieth century who went overseas to teach, whether under the auspices of missionary groups or as members of secular groups, most especially the Peace Corps. This is a gracefully written, thoroughly researched, and creatively organized study. It provides a thoughtful and imaginative perspective on how Americans who served as teachers overseas conceived of the American project overseas.
-- Fritz Fischer Journal of American History


Through historical analysis and comments on teaching in the new global age, Zimmerman gives readers of Innocents Abroad much to consider.
-- Christine Ogren Teachers College Record


With Innocents Abroad, Jonathan Zimmerman establishes himself as one of the more adroit thinkers among contemporary educational and cultural historians...More than simply a study of Americans teaching overseas throughout the "American Century," then, Innocents Abroad offers a fresh way to think about the seemingly irreconcilable tension underlying the universalist and relativist approaches to culture prevalent in the world today...Offering us insight into the ways that we might value freedom and equality for all people while also respecting diverse worldviews, Innocents Abroad makes a significant contribution to educational and cultural history as well as to our efforts to understand the post-9/11 world in which we live.
-- Charles Dorn History of Education Quarterly


This is an eloquent history that provides a unique window on American citizen diplomacy during the twentieth century. As American citizens, overseas teachers were often conscious of mediating political worlds, even as they were conscious at personal levels of mediating professional duties, social identities, and moral responsibilities. Zimmerman effectively maps both sets of intersections, thereby thickening descriptions of citizen diplomacy. Overseas teachers were also deployed by organizations in most cases, and the teacher perspectives Zimmerman assembles are important angles of vision on organizational channels of citizen diplomacy, including the U.S. Peace Corps and Christian mission organizations. These aspects of Zimmerman's study will be of interest well beyond the academy, including policy makers and practitioners concerned with international development, church missions, and voluntary sector activities. This is a valuable study, and it deserves a wide readership.
-- R. Drew Smith American Historical Review


Zimmerman offers frank analysis of their impressions, ambitions and anxieties--and the cultural and international forces that shaped them. Taking its name from Mark Twain's 1869 work on American encounters overseas, Zimmerman's book shows how what began as a heaven-sent mission to spread the light of American education to the benighted races became, over the course of the century, a source of shame and anxiety for American teachers overseas.
-- Rebecca O'Brien Forbes.com

TABLE OF CONTENTS
Contents
Acknowledgments
Introduction: Aboard the USS Thomas
I American Dilemmas
1 The American Method
2 The American Curriculum
3 Schooling for All?
II American Critiques
4 The Protective Garb of the “Job”
5 Going Global, or Going It Alone?
6 Ambivalent Imperialists
Epilogue: American Teachers in a Global Age
Notes
Index