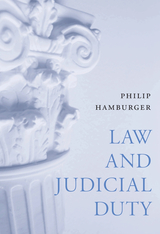 Philip Hamburger’s Law and Judicial Duty traces the early history of what is today called “judicial review.” Working from previously unexplored evidence, Hamburger questions the very concept of judicial review. Although decisions holding statutes unconstitutional are these days considered instances of a distinct judicial power of review, Hamburger shows that they were once understood merely as instances of a broader judicial duty. The book’s focus on judicial duty overturns the familiar debate about judicial power. The book is therefore essential reading for anyone concerned about the proper role of the judiciary. Hamburger lays the foundation for his argument by explaining the common law ideals of law and judicial duty. He shows that the law of the land was understood to rest on the authority of the lawmaker and that what could not be discerned within the law of the land was not considered legally binding. He then shows that judges had a duty to decide in accord with the law of the land. These two ideals—law and judicial duty—together established and limited what judges could do. By reviving an understanding of these common law ideals, Law and Judicial Duty calls into question the modern assumption that judicial review is a power within the judges’ control. Indeed, the book shows that what is currently considered a distinct power of review was once understood as a matter of duty—the duty of judges to decide in accord with the law of the land. The book thereby challenges the very notion of judicial review. It shows that judges had authority to hold government acts unconstitutional, but that they enjoyed this power only to the extent it was required by their duty.In laying out the common law ideals, and in explaining judicial review as an aspect of judicial duty, Law and Judicial Duty reveals a very different paradigm of law and of judging than prevails today. The book, moreover, sheds new light on a host of misunderstood problems, including intent, manifest contradiction, the status of foreign and international law, the cases and controversies requirement, and the authority of judicial precedent.
REVIEWS
A work of exemplary scholarship that sheds abundant new light on a complex and controversial subject.
-- Charles F. Hobson, editor of The Papers of John Marshall


Law and Judicial Duty is legal history on a grand scale. The book will reshape the scholarly debate about the origins and nature of judicial review.
-- R. Kent Newmyer, author of John Marshall and the Heroic Age of the Supreme Court


Hamburger is an accomplished and assiduous legal historian, and his book is a work of imposing scholarship...The history that Hamburger has excavated is genuinely fascinating, and it may alter the terms of debate among constitutional theorists, preoccupied as many of them are with origins...[It's] a pleasure to read, and that is in part because of the enormous labor that its author poured into it. Clearly it was a labor of love...Philip Hamburger has not only greatly enriched legal history, but he has enabled us to see, if not what the judges of old actually thought, let alone what unconscious thoughts and emotions motivated them, then at least how they wished to be seen; and that is an important part of a proper understanding of judicial behavior, ancient and modern.
-- Richard A. Posner New Republic


In Law and Judicial Duty, Hamburger provides by far the most comprehensive historical account of the ideal of judicial duty that undergirded our framers' construction of the federal judiciary.
-- Michael W. McConnell First Things