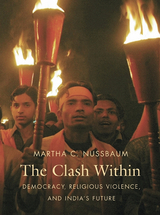 While America is focused on religious militancy and terrorism in the Middle East, democracy has been under siege from religious extremism in another critical part of the world. As Martha Nussbaum reveals in this penetrating look at India today, the forces of the Hindu right pose a disturbing threat to its democratic traditions and secular state.

Since long before the 2002 Gujarat riots--in which nearly two thousand Muslims were killed by Hindu extremists--the power of the Hindu right has been growing, threatening India's hard-won constitutional practices of democracy, tolerance, and religious pluralism. Led politically by the Bharatiya Janata Party, the Hindu right has sought the subordination of other religious groups and has directed particular vitriol against Muslims, who are cast as devils in need of purging. The Hindu right seeks to return to a "pure" India, unsullied by alien polluters of other faiths, yet the BJP's defeat in recent elections demonstrates the power that India's pluralism continues to wield. The future, however, is far from secure, and Hindu extremism and exclusivity remain a troubling obstacle to harmony in South Asia.

Nussbaum's long-standing professional relationship with India makes her an excellent guide to its recent history. Ultimately she argues that the greatest threat comes not from a clash between civilizations, as some believe, but from a clash within each of us, as we oscillate between self-protective aggression and the ability to live in the world with others. India's story is a cautionary political tale for all democratic states striving to act responsibly in an increasingly dangerous world.

REVIEWS
This is an extraordinarily interesting book on a very difficult subject. Martha Nussbaum's commanding familiarity with culturally related political issues across the world, past and present, combines immensely fruitfully here with her involvement and understanding of India.
-- Amartya Sen, Harvard University


This impressive and important book grapples with the problems and consequences of religious extremism. Nussbaum's brilliant analysis of the controversy over religion and democracy in India effortlessly moves between political history, philosophy, and law, to give us a powerful and compelling narrative of the political world of the Hindu Right. It is a must-read for all those interested in understanding the dangers of religious extremism and of what preserves democracy and pluralism in the face of tensions and conflicts within.
-- Zoya Hasan, Jawaharlal Nehru University


Preoccupation with the purported clash between civilizations has masked the clash within democracies. This passionate, engaged book has much to teach an American audience about the vulnerability and resilience of Indian democracy. Perhaps it will also stimulate reflections about similar clashes within American democracy.
-- Amrita Basu, Amherst College


Once more, Martha Nussbaum has applied her profound philosophical intelligence to a challenging question in the practical world. In thinking through the dangers raised by the Hindu right, she teaches us a great deal about the dangers of dogmatism everywhere.
-- K. Anthony Appiah, Princeton University


Few contemporary philosophers in the West have reckoned with India's complex experience of democracy; and even fewer have engaged with it as vigorously as [Nussbaum] does in The Clash Within...[A] strongly felt and stimulating book.
-- Pankaj Mishra New York Review of Books


Martha Nussbaum's The Clash Within presents a powerful analysis of the Hindu Right in contemporary India that is insightful and penetrating...She weaves a rich tapestry of how Hindu thought has been reshaped and distorted...She is correct to say "the clash within" that we find in India lies everywhere...The Clash Within is another remarkable achievement from the most exciting political philosopher of our age. I cannot recommend it highly enough.
-- Thom Brooks Times Higher Education Supplement


Nussbaum is an informed outsider looking in...Nussbaum takes one incident--the 2002 Gujarat riots that followed the burning of a train carrying Hindu activists in Godhra--and builds a grand narrative of Hindu nationalism...Nussbaum sees lessons in India's democratic achievements for the rest of the world, particularly America. Her thesis supports Ghandi's claim that "the real struggle that democracy must wage is the struggle within the individual self, between the urge to dominate and defile the other, and a willingness to live respectfully on terms of compassion and equality."
-- Salil Tripathi New Statesman


Nussbaum sounds a wake-up call to those who may have been unaware of the ugly nature of events in India in recent times, and the hate-filled ideology that informs them...As further evidence of the undemocratic danger that India now faces, Nussbaum turns to the attempt of the Hindu Right to hijack history and rewrite the Indian past to demonize Muslims and glorify Hindus.
-- David Arnold Times Literary Supplement


At a time when India is claiming more of the world's attention, the philosopher Nussbaum offers an informatively rich and sophisticated analysis of democracy and religious extremism there.
-- Lucian W. Pye Foreign Affairs


The Clash Within has a salutary message for crusading secularists as well as for lovers of India.
-- David Goodall The Tablet


In The Clash Within, a passionate look at the crisis of democracy and religious violence in India, Martha Nussbaum provides a detailed reconstruction of the genocide she says occurred in Gujarat. She shows that the violence had been planned well in advance, and she chronicles the failures of the state to prosecute the accused Hindu-right activists or their mentors in the Bharatiya Janata Party...Nussbaum says the main purpose of her book is to inform European and American readers about a "complex and chilling case of religious violence that does not fit some common stereotypes about the sources of religious violence in today's world." She does that well.
-- Basharat Peer The Nation


This is a humanistic and psychological study that traces the [Hindu] Right's rage to reaction against both the Muslim and British conquests of India, which humiliated and shamed Hindus...Instead of the "clash of civilizations," Nussbaum sees a clash within each culture, but her book could serve as a Huntington case study of the roots and rise of Hindutva (Hinduness).
-- M. G. Roskin Choice


Martha Nussbaum is a distinguished American philosopher, whose formidable corpus of academic work is the more remarkable for her enlisting of philosophy in the service of her commitment to a more just and rights-respecting world. Nussbaum is also a passionate Indophile who has collaborated, with Amartya Sen, on the capabilities approach to human, and especially women’s, development. This book—written chiefly for an American audience—is an expression of her deep personal engagement with the challenges of pluralism in Indian democracy.
-- Niraja Gopal Jayal Outlook India


The Clash Within is a book of and for our time. It will profoundly change the way we think about religio-national violence and about pluralism and democracy. Nussbaum’s persuasive tour de force makes clear that cultural diversity is a source of innovation and creativity and that a national identity that is layered and multiple, rather than exclusive or exclusionary, leads to cosmopolitan thinking and cultural innovation. Her command of the ethical, legal and sociopolitical problems that a political reading of religion poses for a multicultural plural democracy makes this work essential reading for anyone interested in the role of religion and the future of the nation-state. ,
-- Tulasi Srinivas Harvard Divinity Bulletin


In an age of academic specialization, [Nussbaum] is one of the few modern renaissance scholars...The Clash Within should be read not only by those interested in India's present and future, but by anyone seeking to understand the processes by which even the most complex and sophisticated societies can navigate their way into a morass of violent intolerance.
-- Irfan Yusuf Weekend Australian

TABLE OF CONTENTS
Contents
Preface
Acknowledgments
Map of India
Introduction
1. Genocide in Gujarat
2. The Human Face of the Hindu Right
3. Tagore, Gandhi, Nehru
4. A Democracy of Pluralism, Respect, Equality
5. The Rise of the Hindu Right
6. Fantasies of Purity and Domination
7. The Assault on History
8. The Education Wars
9. The Diaspora Community
Chronology
Glossary
Notes
Index