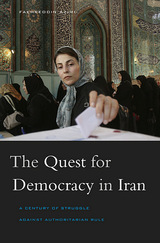 The Constitutional Revolution of 1906 launched Iran as a pioneer in a broad-based movement to establish democratic rule in the non-Western world. In a book that provides essential context for understanding modern Iran, Fakhreddin Azimi traces a century of struggle for the establishment of representative government.

The promise of constitutional rule was cut short in the 1920s with the rise of the Pahlavi dynasty. Reza Shah, whose despotic rule Azimi deftly captures, maintained the façade of a constitutional monarch but greeted any challenge with an iron fist: “I will eliminate you,” he routinely barked at his officials. In 1941, fearful of losing control of the oil-rich region, the Allies forced Reza Shah to abdicate but allowed Mohammad Reza to succeed his father. Though promising to abide by the constitution, the new Shah missed no opportunity to undermine it.

The Anglo-American–backed coup of 1953, which ousted reformist premier Mohammed Mosaddeq, dealt a blow to the constitutionalists. The Shah’s repressive policies and subservience to the United States radicalized both secular and religious opponents, leading to the revolution of 1979. Azimi argues that we have fundamentally misunderstood this event by characterizing it as an “Islamic” revolution when it was in reality the expression of a long-repressed desire for popular sovereignty. This explains why the clerical rulers have failed to counter the growing public conviction that the Islamic Republic, too, is impervious to political reform—and why the democratic impulse that began with the Constitutional Revolution continues to be a potent and resilient force.

REVIEWS
Twentieth-century Iranian history provides wonderful examples of recurring themes of revolution, authoritarian rule, and the attempt to create democratic institutions. In this landmark book, Fakhreddin Azimi illuminates a subject of the greatest importance to Iran, the Middle East, and, indeed, the rest of the world. Elegantly written and deeply informative, The Quest for Democracy in Iran is a must read.
-- Roger Owen, Harvard University


Azimi's impressive book offers a penetrating analysis of what sustained authoritarian rule in Iran over the last one hundred years and how the aspirations and quest for social justice, the rule of law, and freedom have remained both frustrated and resilient. He shows that the key hopes and agendas associated with the 1906 Constitutional Revolution remain as salient as ever.
-- Ehsan Yarshater, Columbia University


The Quest for Democracy in Iran is a book of immense erudition, yet it is also a work of passion and sympathy for the Iranian people. A rigorous and fair-minded assessment of the Pahlavi dynasty and the revolution under Khomeni, it will command the attention of the general public as well as scholars.
-- Wm. Roger Louis, University of Texas at Austin


For Azimi, all Iranian history after 1905 is an attempt to fulfill, partially accommodate or circumvent the ideals of a constitutional movement that placed popular representation at the fore of its priorities. He traces how at various moments public alienation and resentment have been articulated or expressed and finally, how "a culture of confrontation" emerged. His book goes a long way toward recuperating a history of Iranian democracy that has been expunged by Orientalists who wonder aloud if there is something about Muslim lands that makes them inhospitable to democracy or, alternatively, those who have dismissed periods of hectic parliamentary activity as mere chaos.
-- Negar Azimi The Nation


Fakhreddin Azimi's The Quest for Democracy in Iran is particularly strong on retrieving the importance of the Constitutional Revolution and threading it through to the Islamic Republic's current dialectic between republicanism and theocracy.
-- David Gardner Financial Times


The sophistication of [Azimi's] concepts of democracy and authoritarianism, his command of the sources, and his intellectual clarity and energy have combined to produce an insightful book that will draw the attention of all interested in Iranian culture and history.
-- L. J. Alderink Choice