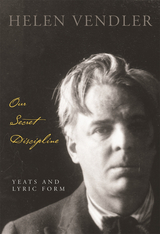 Listen to a short interview with Helen VendlerHost: Chris Gondek | Producer: Heron & CraneThe fundamental difference between rhetoric and poetry, according to Yeats, is that rhetoric is the expression of one's quarrels with others while poetry is the expression (and sometimes the resolution) of one's quarrel with oneself. This is where Helen Vendler's Our Secret Discipline begins. Through exquisite attention to outer and inner forms, Vendler explores the most inventive reaches of the poet's mind. This book is a space-clearing gesture, an attempt to write about lyric forms in Yeats in unprecedented and comprehensive ways. The secret discipline of the poet is his vigilant attention to forms--whether generic, structural, or metrical. Yeats explores the potential of such forms to give shape and local habitation to volatile thoughts and feelings.

Helen Vendler remains focused on questions of singular importance: Why did Yeats cast his poems into the widely differing forms they ultimately took? Can we understand Yeats's poetry better if we pay attention to inner and outer lyric form? Chapters of the book take up many Yeatsian ventures, such as the sonnet, the lyric sequence, paired poems, blank verse, and others. With elegance and precision, Vendler offers brilliant insights into the creative process and speculates on Yeats's aims as he writes and rewrites some of the most famous poems in modern literature.

REVIEWS
This new monumental study of the technical (and, ultimately, emotional) accomplishment in Yeats's poems represents something close to a life's work: it will surely attract international attention...Vendler's careful book will likely advance the way experts see Yeats, but she also speaks to all the readers who care about the Irish Nobelist's body of poetry, which looks more complex, and more delightful, through Vendler's lens.
-- Publishers Weekly (starred review)


Helen Vendler has entirely consumed William Butler Yeats...As she leads us by the hand through some of the best-known poems in the English language, we discover how little we knew about them after all, and how hard the poet worked to make them sound...inevitable. Our Secret Discipline is so much an intellectual feast.
-- John Leonard Harper's


Vendler can be as charming a tour guide through Yeats as she is a learned one. And her frame of examining Yeats's external and internal lyric structures offers a new, insightful, and often revelatory map of Yeatsian terrain.
-- Tess Taylor Barnes and Noble Review


Is there any critic more thorough than Helen Vendler?... Her carefulness, her attention to minutiae, is a rare quality, particularly when set against the current mores of poetry criticism, which, for all its highly technical vocabulary, has been for many years an enterprise largely impressionistic...Any serious reader of English poetry should be delighted that, in Our Secret Discipline, she has turned her attention to the question of form in W.B. Yeats's poetry.
-- Sam Munson New York Sun


A book whose value may exceed anything [Vendler] has hitherto produced. It is the first exhaustive account of Yeats's lyric styles as they revealed themselves in 50 years of verse forms as "the necessary and skilled embodiment of the poet's moral urgency." Vendler is the ideal close reader and listener to undertake the very large task of coming to terms with Yeats's poetry...The great merit of Vendler's approach is that she never rests content with merely identifying and describing Yeats's formal choices but goes on to consider how such forms are employed in the service of moral and human content...She is intrepid and only occasionally over-ingenious...Readers who have assumed they were familiar, even intimate, with his body of lyric verse will read Vendler's pages and find their eyes have been opened, in Hart Crane's words, to "new thresholds, new anatomies."
-- William H. Pritchard Boston Globe


[A] superb study of Yeats's uses of lyric form...Vendler offers much astute description of the architecture of Yeats's poems, but also considers the way in which his forms reflected his cultural vision...It certainly helps enormously to have a critic as expert as Vendler describe in slow motion, frame by frame, so to speak, her understanding of the effects of each choice the poet makes. Her shrewd, tightly focused commentaries encourage us to take each poem slowly, on its own terms, and to pay attention in particular to tbe ways in which it either conforms to or confounds the expectations it fosters...Vendler's study of his uses of lyric form is an indispensable guide to anyone interested in the means whereby Yeats transfigured into "masterful images" the random contingencies of life.
-- Mark Ford New York Review of Books


[Vendler's] chapters on Yeats's "Byzantium" lyrics, his courtly ottava rima poems and his blank verse are all filled with sensitive, compelling insights that will be critical guideposts for years to come.
-- Anthony Cuda Washington Post Book World