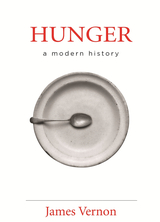 Hunger is as old as history itself. Indeed, it appears to be a timeless and inescapable biological condition. And yet perceptions of hunger and of the hungry have changed over time and differed from place to place. Hunger has a history, which can now be told.

At the beginning of the nineteenth century, hunger was viewed as an unavoidable natural phenomenon or as the fault of its lazy and morally flawed victims. By the middle of the twentieth century, a new understanding of hunger had taken root. Across the British Empire and beyond, humanitarian groups, political activists, social reformers, and nutritional scientists established that the hungry were innocent victims of political and economic forces outside their control. Hunger was now seen as a global social problem requiring government intervention in the form of welfare to aid the hungry at home and abroad. James Vernon captures this momentous shift as it occurred in imperial Britain over the past two centuries.

Rigorously researched, Hunger: A Modern History draws together social, cultural, and political history in a novel way, to show us how we came to have a moral, political, and social responsibility toward the hungry. Vernon forcefully reminds us how many perished from hunger in the empire and reveals how their history was intricately connected with the precarious achievements of the welfare state in Britain, as well as with the development of international institutions, such as the United Nations, committed to the conquest of world hunger. All those moved by the plight of the hungry will want to read this compelling book.

REVIEWS
A work of exciting originality that uses hunger to challenge our essential ideas about the history of the welfare state and of democracy and citizenship in twentieth-century Britain. This is a very major book.
-- Geoff Eley, University of Michigan


A lively and engaging study that demonstrates how hunger is as much a historical condition as it is a biological one. Elegant, intelligent, and ambitious, it will be widely read and admired.
-- Philippa Levine, University of Southern California


Hunger: A Modern History moves impressively between the British domestic and political, the colonial and the global, without straining the argument or losing touch with the sources. James Vernon's research ranges over vast tracts of material, demonstrating concretely and graphically how discussion about famine originating in nineteenth-century India became central to discussion about nutrition in twentieth-century Britain.
-- Gareth Stedman Jones, Cambridge University


This is history writing of the most jolting and publicly significant kind.
-- Bruce Robbins, Columbia University


We think of hunger and famine as symptoms of a failed economy and government. But shifting cultural perceptions of hunger are historical agents in their own right, as this probing study, concentrating on 19th- and 20th-century Britain, shows...Vernon offers much lucid, trenchant rethinking on a resonant subject.
-- Publishers Weekly


Vernon has put together a persuasive and wide-ranging history of hunger. His central tenet that hunger is not a natural catastrophe--it emerges into public view within historical contexts and for precise political reasons--is compelling.
-- Joanna Bourke The Times


This survey of British attitudes towards hunger is no mere liberal guilt-inducer...The book ends in the 1940s with glances forward to Thatcher, Tebbit, and Blair. Its range is political, sociological, and media-aware: "Tell the bastards!" says a 1930s documentary film-maker. Scholarly and unjudgmental, the book does.
-- Martin Hoyle Financial Times


Charts, in great detail, the way hunger was constructed in the 19th century as something that the lazy and spineless brought upon themselves and how this perception changed in the 20th century with the emergence of the welfare state. Hunger may well be the subject of the book but in many ways it is the site for a discussion of the claims of market-based liberalism and social democracy and the way both camps depicted the very welfare state that, among other things, sought to eliminate malnutrition.
-- Steven Carroll The Age


This tension--between the global and the local, the high-calorie west and the hungry rest--lies at the heart of Hunger: A Modern History. Historian James Vernon's widely acknowledged grasp of political history from the ground up brings depth and discernment to this compellingly argued and cogently written book. Vernon aims to provide a history of hunger in the UK and the British Empire in the late 19th and early 20th centuries, beginning with the pomp and circumstance of the 1851 Great Exhibition aand ending with the cheerful austerity of the 1951 Festival of Britain. He uses changing British responses to hunger as a window on the rise of new forms of civil society and social welfare, and as a way to explore another recurring theme in his work--the question of responsibility. Who was to blame for hunger, and who could be expected to relieve it?...This eye for both sides of a debate makes Hunger: A Modern History both acutely moving and, in the main, profoundly persuasive...Hunger: A Modern History is politically engaged history at its most humane, and Vernon uses his compassion and erudition to drive home a deeply disquieting truth. In the secular, postmodern west, hunger is perhaps the closest we get to guilt.
-- Richard Barnett Lancet