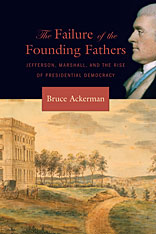 The ink was barely dry on the Constitution when it was almost destroyed by the rise of political parties in the United States. As Bruce Ackerman shows, the Framers had not anticipated the two-party system, and when Republicans battled Federalists for the presidency in 1800, the rules laid down by the Constitution exacerbated the crisis. With Republican militias preparing to march on Washington, the House of Representatives deadlocked between Thomas Jefferson and Aaron Burr. Based on seven years of archival research, the book describes previously unknown aspects of the electoral college crisis. Ackerman shows how Thomas Jefferson counted his Federalist rivals out of the House runoff, and how the Federalists threatened to place John Marshall in the presidential chair. Nevertheless, the Constitution managed to survive through acts of statesmanship and luck.

Despite the intentions of the Framers, the presidency had become a plebiscitarian office. Thomas Jefferson gained office as the People's choice and acted vigorously to fulfill his popular mandate. This transformation of the presidency serves as the basis for a new look at Marbury v. Madison, the case that first asserted the Supreme Court's power of judicial review. Ackerman shows that Marbury is best seen in combination with another case, Stuart v. Laird, as part of a retreat by the Court in the face of the plebiscitarian presidency. This "switch in time" proved crucial to the Court's survival, allowing it to integrate Federalist and Republican themes into the living Constitution of the early republic.

Ackerman presents a revised understanding of the early days of two great institutions that continue to have a major impact on American history: the plebiscitarian presidency and a Supreme Court that struggles to put the presidency's claims of a popular mandate into constitutional perspective.

REVIEWS
Just like with his magnificent We the People, Bruce Ackerman has intertwined well researched history with an unparalleled skill as a constitutional theorist. The Failure of the Founding Fathers describes the maneuvering that validated Thomas Jefferson's claim to the presidency that then created a decade-long confrontation between the Jeffersonians in the elected branches of the Federalists in the judiciary. This is constitutional history at its finest.
-- Lucas A. Powe, Jr., University of Texas at Austin, and author of The Warren Court and American Politics


Bruce Ackerman has written a provocative account of the impact upon America's political future of the Jeffersonian opposition to the Federalists. Completely levitating himself out of the historiography of party formation, Ackerman in The Failure of the Founding Fathers demonstrates just how powerful the vexed election of 1800 proved to be.
-- Joyce Appleby, University of California, Los Angeles, and author of Inheriting the Revolution: The First Generation of Americans


Many fine historians have written about the presidential election of 1800. But only Bruce Ackerman has placed all of the events surrounding the election into the context of American constitutional development. With his usual mixture of careful historical exegesis, narrative sweep, and bold interpretive imagination, Ackerman enables us to see a number of aspects of our constitutional history as if for the first time (beginning with the fact that the almost unknown case of Stuart v. Laird, was far more significant that Marbury v. Madison, decided a week earlier). Anyone interested in the development of American constitutionalism--and American political institutions--should be fascinated by this book.
-- Sanford Levinson, University of Texas Law School, author of Wrestling With Diversity


Ackerman innovatively recasts the histories of parties, constitutional interpretation and presidential politics...Rarely has a study of American history been more timely.
-- Publishers Weekly


[Ackerman] goes against the fashion to produce this major reinterpretation of the immediate post-1787 history of America's charter.
-- Robert F. Nardini Library Journal


Bruce Ackerman, who teaches at Yale Law School, might be expected to advocate for either the Jeffersonians or their opponents, the Federalists. Instead he dishes blame all around to make the point that the mistakes of 1787 have shaped our politics. He sees American constitutionalism as a work in progress over two centuries. This liberal jurisprudence opposes the originalism of Antonin Scalia and other conservative jurists who insist that the true meanings of a law or decision are simply the literal ones right there in the text if you read them the right (Right?) way. The historical approach favored by Ackerman stresses continual reinterpretation of constitutional articles, legislation, presidential orders, and judicial decisions. Like the landmark Brown v. Board of Education decision that still inspires its practitioners, it needs a lot of detailed history to back up the argument. And that's what we get in The Failure of the Founding Fathers. Fortunately, Ackerman can tell a story as well as score points against originalists...[This is] thought-provoking history.
-- David Waldstreicher Boston Globe


The Failure of the Founding Fathers contains the familiar dynamics of institutional triggers, synthesis of orders, and the nonlegal processes that play an important role in the American constitutional order, but it also offers new surprises, promising to change the way readers think about the date of the founding, MARBURY v. MADISON, and John Marshall...One cannot take leave of this book without noting what a fun read it is, with Ackerman acting as the armchair narrator leading the reader through events. Filled with questions of "who dunnit?" with the machinations of "crafty" and "sensible" politicians, as well as the author's own "detective" work, this book never lets the reader forget the thrills to be found in constitutional history.
-- Kathleen S. Sullivan The Law and Politics Book Review


Highly ambitious and well-researched...[Its] great value [is its] testimony to the essential fragility of constitutional and democratic development...Ackerman tells his story well and persuasively...The book is a tour de force that draws on an impressive amount of archival research. Yet its real value lies less within Ackerman's absorbing story of this dire political crisis and the political dynamics it precipitated than in his skill and imagination in advancing his theory of constitutional change in the U.S. His arguments are solid and remain refreshingly heretical in a milieu that typically lionises the framers without accepting their limitations and the need for subsequent institutional and constitutional adjustments to accommodate changing political realities.
-- John Owens Times Higher Education Supplement