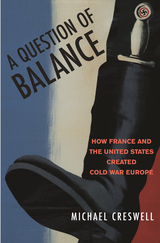 Challenging standard interpretations of American dominance and French weakness in postwar Western Europe, Michael Creswell argues that France played a key role in shaping the cold war order. In the decade after the war, the U.S. government's primary objective was to rearm the Federal Republic of Germany within the framework of a European defense force--the European Defense Community. American and French officials differed, however, over the composition of the EDC and the rules governing its organization and use.

Although U.S. pressure played a part, more decisive factors--in both internal French politics and international French concerns--ultimately led France to sanction the plan to rearm West Germany. Creswell sketches the successful French challenge to the United States, tracing the genuine, sometimes heated, debate between the two nations that ultimately resulted in security arrangements preferred by the French but acceptable to the Americans.

Impressively researched and vigorously argued, A Question of Balance advances significantly our understanding of power politics and the rise of the cold war system in Western Europe.

REVIEWS
Michael Creswell's book is a tour de force, at once bold, sophisticated and nuanced. It will spark a healthy debate over the roles of France and the United States in NATO during its early years. An absolute must read for students of the Cold War.
-- William Stueck, University of Georgia


Creswell challenges the widespread belief that the United States (with a hand from Britain) had to overcome persistent French resistance in order to create the security institutions that won the cold war in Europe. Drawing on careful, multi-archival research, he shows that French leaders were not as worried about German revanchism as many have claimed and that they recognized that the Soviet Union was the real threat. This is revisionist history at its best, convincingly correcting the conventional wisdom without striving for shock value or overplaying its claims.
-- Stephen M. Walt, Harvard University


Written with confidence and clarity, this concise study offers the best treatment to date of the political contest between the United States and France over Germany's rearmament and the shape of cold war Europe. Creswell throws down the gauntlet to cold war historians who have portrayed a reluctant France dragged kicking and screaming into accepting a subordinate role in the Anglo-American alliance.
-- Thomas A. Schwartz, author of Lyndon Johnson and Europe


Creswell's outstanding book sheds new light on the origins of the Cold War system in Europe. Whereas most scholars focus on America's relations with Germany and the Soviet Union, A Question of Balance looks at Franco-American relations, and shows that they were of great importance in determining the shape of the Western Alliance.
-- John J. Mearsheimer, University of Chicago


Creswell intelligently examines the negotiations that led to West Germany's rearmament after the French Parliament rejected the plan for a European Defense Community in August 1954. For a European reader, this book contains few surprises. For Americans convinced that a superpower such as the United States could easily have overridden objections by weaker allies, it may be a (mild) shock that a state as internally divided as postwar France could resist the pressure and threats of a senior ally determined to proceed swiftlyon the rearmament of the recently defeated enemy--ultimately persuading the senior ally that patience and compromise were necessary to achieve its most important objectives...The final "balance" to which the book's title refers required skill and common sense rather than heroic feats of imagination, and the statesmen of the period demonstrated these gifts in abundance.
-- Stanley Hoffman Foreign Affairs


Creswell breezes us through with confidence and sophistication; the figures come to life and the debates feel vital. It is to the author's credit that we need not accept his thesis to be very impressed with his account.
-- Seth Armus H-Diplo


In this useful addition to the literature on the Cold War, Creswell details the history of the debate over the European Defense Community (EDC) to argue that France, in rejecting the EDC, shaped the Cold War order in Western Europe...His work is an important corrective to US- and Soviet-centered histories of the Cold War.
-- L. M. Lees Choice