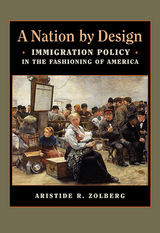 According to the national mythology, the United States has long opened its doors to people from across the globe, providing a port in a storm and opportunity for any who seek it. Yet the history of immigration to the United States is far different. Even before the xenophobic reaction against European and Asian immigrants in the late nineteenth century, social and economic interest groups worked to manipulate immigration policy to serve their needs. In A Nation by Design, Aristide Zolberg explores American immigration policy from the colonial period to the present, discussing how it has been used as a tool of nation building.

A Nation by Design argues that the engineering of immigration policy has been prevalent since early American history. However, it has gone largely unnoticed since it took place primarily on the local and state levels, owing to constitutional limits on federal power during the slavery era. Zolberg profiles the vacillating currents of opinion on immigration throughout American history, examining separately the roles played by business interests, labor unions, ethnic lobbies, and nativist ideologues in shaping policy. He then examines how three different types of migration--legal migration, illegal migration to fill low-wage jobs, and asylum-seeking--are shaping contemporary arguments over immigration to the United States.

A Nation by Design is a thorough, authoritative account of American immigration history and the political and social factors that brought it about. With rich detail and impeccable scholarship, Zolberg's book shows how America has struggled to shape the immigration process to construct the kind of population it desires.

REVIEWS
A Nation by Design is the first comprehensive account of American immigration policy from the colonial period to the present. One of its great strengths is that it places American developments in a cross-national and comparative perspective. Professor Zolberg's breadth of knowledge and the range of his reading are remarkable. The book abounds in fresh insights and interpretations, comprehensiveness and richness of detail. This is a magnum opus.
-- George Fredrickson, Stanford University


A Nation by Design is certain to become a standard reference for immigration scholars and a must-read for graduate students in the disciplines-history, political science, and sociology-that produce the bulk of these scholars. It provides a genuinely new perspective on the creation and centrality of immigration policy, and as befits a new point of view, it sketches a landscape with features that have not been visible before.
-- Richard Alba, State University of New York at Albany


A Nation by Design is a monumental work by one of America's most distinguished and most historically minded social scientists. No other book on immigration possesses its sweep, nor does any other analyze the history of American immigration policy as comprehensively and insightfully as this one does. For at least a generation, A Nation by Design will become the starting point for anyone seeking to delve into this complex and important subject.
-- Gary Gerstle, University of Maryland


This beautifully realized and intellectually capacious analytical history moves the story of immigration policy from the side to the center of American political development. Deep, learned, and inventive, A Nation by Design profoundly alters what we know and how we think about demography and identity, membership and law, citizenship and belonging as it crosses the boundaries of disciplines, periods, and ideas.
-- Ira Katznelson, Columbia University


If you want to understand why the politics of immigration take the form they do, read Aristide R. Zolberg's richly informative book immediately...We now have in our hands a book so thoughtful, so extensively researched, and so balanced in its conclusions that if it does not inform both the current debate and the ones sure to follow, the debate is bound to be poorer even than it already is.
-- Alan Wolfe New Republic


Aristide Zolberg's A Nation by Design, offers the most comprehensive treatment of US immigration policy ever undertaken and is a major piece of scholarship that will prove indispensable to researchers for years to come. This achievement is no mean feat given the range of historical, political, economic, and sociological analyses of US immigration. What sets Zolberg's treatment apart is its unique historical depth and its realization of the importance of policies and practices other than those officially enacted by Congress--the focus of most earlier historical work on immigration policy...In many ways, immigration is America's never-ending debate. As Zolberg clearly shows, at every point in the history of the nation, from its inception as a dream among idealistic and free-thinking colonists to the present war on terrorism, immigration has figured prominently in debates about who us an American and what it means to be a citizen and resident of the United States. Over the course of US history, attacks on immigrants have waxed and waned, yet in the long run American society has incorporated an ever-widening array of peoples and nationalities into the national franchise. What distinguishes the current wave of anti-immigrant agitation from its predecessors is not its demonizing of foreigners or its harsh treatment of noncitizens, but its clever use of the fear of foreigners to launch a broader assault on the civil liberties not just of immigrants, but of all Americans.
-- Douglas S. Massey Population and Development Review


This is the book with which all of us working in the sphere will now have to measure up against.
-- Kristofer Allersfeldt History


A brief review cannot highlight the insights and arresting observations peppered throughout every chapter of A Nation by Design...in this hyper-charged political climate Zolberg has provided a singular service. A Nation by Design is both an awesome work of scholarship and an indispensable source for understanding the seamy and complicated ancestry of America’s current politics of immigration.
-- Michael B. Katz Journal of Social History