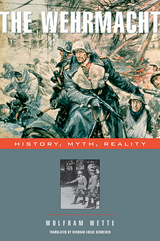 This book is a profound reexamination of the role of the German army, the Wehrmacht, in World War II. Until very recently, the standard story avowed that the ordinary German soldier in World War II was a good soldier, distinct from Hitler's rapacious SS troops, and not an accomplice to the massacres of civilians. Wolfram Wette, a preeminent German military historian, explodes the myth of a "clean" Wehrmacht with devastating clarity.

This book reveals the Wehrmacht's long-standing prejudices against Jews, Slavs, and Bolsheviks, beliefs that predated the prophecies of Mein Kampf and the paranoia of National Socialism. Though the sixteen-million-member German army is often portrayed as a victim of Nazi mania, we come to see that from 1941 to 1944 these soldiers were thoroughly involved in the horrific cleansing of Russia and Eastern Europe. Wette compellingly documents Germany's long-term preparation of its army for a race war deemed necessary to safeguard the country's future; World War II was merely the fulfillment of these plans, on a previously unimaginable scale.

This sober indictment of millions of German soldiers reaches beyond the Wehrmacht's complicity to examine how German academics and ordinary citizens avoided confronting this difficult truth at war's end. Wette shows how atrocities against Jews and others were concealed and sanitized, and history rewritten. Only recently has the German public undertaken a reevaluation of this respected national institution--a painful but necessary process if we are to truly comprehend how the Holocaust was carried out and how we have come to understand it.

REVIEWS
This is a powerful book, provocative, enlightening, disturbing. Based on three decades of solid research, Wette debunks the myth, created by former Wehrmacht officers and continued by their Allied counterparts, that the German military fought a "clean" war in the East 1941-45. He strips away the layers of obfuscation and cover-up to set the record straight: Wehrmacht and SS hand-in hand conducted a campaign of racial extermination in the USSR. The book is a must read.
-- Holger H. Herwig, University of Calgary


A badly needed analysis of how the German World War II military came to descend into mass murder, how this descent originated, how it was systematically obscured by a legend of "clean" warfare, and how that legend is finally being demolished. A fine piece of important research presented in very clear -- and well translated -- prose."
-- Gerhard L. Weinberg, University of North Carolina


The conventional wisdom that the German army in WWII fought a relatively clean fight, unsullied by the atrocities committed by the Nazi SS, has recently been challenged and largely demolished. This probing study explores the rise and fall of that myth in the light of scholarship debunking it...Wette's hard-hitting indictment also emphasizes the broad culpability of German society for the crimes of the Third Reich.
-- Publisher's Weekly


This is one of those modestly sized books on a large subject that succeeds in being definitive...The Wehrmacht is an important contribution to current German historiography. It seeks an answer to the question that rages in German intellectual circles: Was Nazism an aberration in German history, a sickness that came upon a formerly healthy and civilized nation, or was it a natural outgrowth of traits well-entrenched in the national psyche? It is clear from the outset which side of this controversy Professor Wolfram Wette is on, but it is equally apparent what a thoughtful, well-informed historian he is...The Wehrmacht is as filled with all manner of details--surprising as well as predictable--as it is with passion and insight. Perhaps this is what makes it such a pleasure to read, for Wette never simply asserts, he always proves. Facts, statistics, instances are plentiful, but they never simply lie there on the page; you feel the author's outrage, sometimes his incredulity, even as you trust his veracity and integrity.
-- Martin Rubin San Francisco Chronicle


In the history of WWII, the German army too often has been regarded as an unwilling tool of Adolf Hitler. Wette destroys that myth in his book, an indictment of the German army for its involvement in atrocities against Jews and people in eastern Europe.
-- K. Eubank Choice


Over the last twenty years various scholars, from the pioneering work of Omer Bartov to the more recent work of Ben Shepherd and a host of American and German scholars, have demonstrated that the view of a Wehrmacht with "clean hands" is entirely mistaken. These studies have shown that "average" German soldiers were completely capable of and willing to commit the worst atrocities imaginable. This book is another contribution to that corpus. Thus far the focus has been on explaining how and why the typical Landser became capable of mass murder, but this book is not about the average soldier's descent into barbarism. It is rather a study of the path trod by the commanding officers: the field marshals, generals, and colonels who formulate policy and created an environment in which mass murder could occur. As such, this book complements earlier studies by focusing on the highest levels of the Wehrmacht. Wette demonstrates that this level of command not only knew about and approved of mass murder but, after the war, successfully created the myth that the Wehrmacht had played no role in the crimes committed during the war.
-- Lee Baker Journal of Military History


[Wette’s] arguments will provide a powerful corrective to the outdated view that Wehrmacht leaders were dragged unwillingly into complicity in Nazi-mandated crimes...Attacking the myth of the “clean” Wehrmacht, as Wette reminds us, has been neither easy nor particularly successful in changing popular perceptions. Only through continued research and the writing of critical histories will the complex reality emerge. Wette’s monograph constitutes a key contribution to this effort.
-- Stephen G. Fritz Holocaust and Genocide Studies


Wolfram Wette has synthesized a large body of scholarly studies written by critical military historians in the past thirty years and makes them accessible to a nonspecialist audience...This book is an important contribution to the recent historical literature that reveals the much resisted and painful process by which Germans learned to deal honestly with the unmasterable past.
-- Derek S. Linton The Historian

TABLE OF CONTENTS
Contents
Preface by Peter Fritzsche
Foreword by Manfred Messerschmidt
List of Abbreviations
1. Perceptions of Russia, the Soviet Union,and Bolshevism as Enemies
2. Anti-Semitism in the German Military
3. The Wehrmacht and the Murder of Jews
4. Generals and Enlisted Men
5. The Legend of the Wehrmacht’s “Clean Hands”
6. A Taboo Shatters
7. Conclusion
Notes
Index