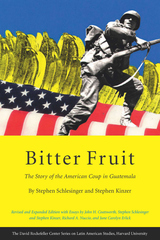 Bitter Fruit: The Story of the American Coup in Guatemala, Revised and Expanded
by Stephen Schlesinger and Stephen Kinzer
introduction by John H. Coatsworth
foreword by Richard A. Nuccio

Bitter Fruit is a comprehensive and insightful account of the CIA operation to overthrow the democratically elected government of Jacobo Arbenz of Guatemala in 1954. First published in 1982, this book has become a classic, a textbook case of the relationship between the United States and the Third World. The authors make extensive use of U.S. government documents and interviews with former CIA and other officials. It is a warning of what happens when the United States abuses its power.
REVIEWS
Schlesinger and Kinzer have done the greatest service to truth and justice by presenting the untold story of the CIA coup.
-- Carlos Fuentes


The reappearance of this small classic is most welcome and important. It helps us understand the disasters that misshaped U.S. and Central American relations after 1954, especially into the 1980s and 1990s.
-- Walter LaFeber, Cornell University


This work was and still is the most riveting account of the U.S. intervention in Guatemala in 1954, and is a testimony to the twisted logic of those immersed in a culture which sees all popular political movements as a threat whether in Guatemala or the rest of the world.
-- Jennifer Schirmer