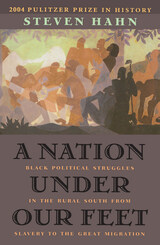 This is the epic story of how African-Americans, in the six decades following slavery, transformed themselves into a political people--an embryonic black nation. As Steven Hahn demonstrates, rural African-Americans were central political actors in the great events of disunion, emancipation, and nation-building. At the same time, Hahn asks us to think in more expansive ways about the nature and boundaries of politics and political practice.

Emphasizing the importance of kinship, labor, and networks of communication, A Nation under Our Feet explores the political relations and sensibilities that developed under slavery and shows how they set the stage for grassroots mobilization. Hahn introduces us to local leaders, and shows how political communities were built, defended, and rebuilt. He also identifies the quest for self-governance as an essential goal of black politics across the rural South, from contests for local power during Reconstruction, to emigrationism, biracial electoral alliances, social separatism, and, eventually, migration.

Hahn suggests that Garveyism and other popular forms of black nationalism absorbed and elaborated these earlier struggles, thus linking the first generation of migrants to the urban North with those who remained in the South. He offers a new framework--looking out from slavery--to understand twentieth-century forms of black political consciousness as well as emerging battles for civil rights. It is a powerful story, told here for the first time, and one that presents both an inspiring and a troubling perspective on American democracy.

REVIEWS
A Nation Under Our Feet is the best study of working class politics published in a generation. By unraveling the riddle of black politics in slavery and tracing the growth of black political activism through Reconstruction into the twentieth century, Hahn forces us to think differently about the American polity and what he calls "the inspiring and dispiriting history of American democracy." An extraordinary achievement.
-- Ira Berlin, author of Generations of Captivity: A History of African-American Slaves


In this sweeping account of black political culture in the rural south, Steven Hahn reveals a century of black community mobilization from slave resistance before the Civil War to the rise of Garveyism in the Deep South of the 1920s. Hahn's breathtaking research and his focus on public activism return to the subject of black rural life a political currency that can only grow in interest.
-- Evelyn Higginbotham, Editor-in-Chief, The Harvard Guide to African-American History


An original book about what it means to be political in America. With stunning research and sparkling narrative, Steven Hahn has written a moving story about political behavior among the slavery and freedom generations of rural, southern blacks. He demonstrates how a people with roots in slavery converted freedom into integrationist and separatist ends all at once. Blacks practiced the craft of bending wills as they bent their backs in labor. This book will take its place among a handful of classics on southern black life and politics.
-- David W. Blight, author of Race and Reunion: The Civil War in American Memory


Imagine a world in which slaves were thoughtful, purposeful political beings before the Northern "liberators" showed up at the gates of Southern plantations. Steven Hahn identifies the constituent elements of slave politics and uncloaks the relationship between public acts of politics and the less visible world of African-American institutions, practices, obligations, communities, and understandings that enabled them. This is a wonderful book which dramatically revises our assumptions about the formidable role of rural working-class people in remaking the nation after slavery.
-- Tera Hunter, author of To 'Joy My Freedom: Southern Black Women's Lives and Labors after the Civil War


Original and deeply informed, the book does an excellent job of rendering those devoted 'to the making of a new political nation while they made themselves into a new people.'
-- Publishers Weekly


Hahn examines how disenfranchised African Americans in the rural South exercised grassroots strategies to gain political power--albeit limited--after emancipation until the migration to the North. Hahn asserts that southern rural blacks were much more active and assertive in gaining political rights than is typically portrayed and explores the connection between labor and political rights....Readers interested in the history of the struggle for racial justice will appreciate this new perspective on the period that preceded the modern civil rights movement.
-- Vanessa Bush Booklist


Steven Hahn's A Nation Under Our Feet is the most comprehensive account yet of black politics in the rural South before, during and after the Civil War. Whereas most previous work has focused either on the slave experience or on post-Emancipation struggles, Hahn's book encompasses both and shows the continuities between how blacks fought for self-determination in the two periods...Based on prodigious research in primary sources, A Nation Under Our Feet is one of the most important works in American social history to appear in recent years...This book [is] a major achievement and a landmark in African-American history.
-- George M. Frederickson The Nation


Hahn argues, in this ambitious and fascinating book, that associations of slaves--centered on kinship, work, and religion--were far more intricate, enduring, and politicized than has been realized...One of the most striking theses here is that black rural laborers, rather than urban, educated freeborn leaders, radicalized Reconstruction.
-- New Yorker


In this magisterial new book, University of Pennsylvania historian Steven Hahn gives us the history of the South from the eve of the Civil War through the dawn of the Great Migration from the perspective of rural blacks. It is an awesome and audacious undertaking. Not since W. E. B. DuBois' monumental Black Reconstruction in America, 1860-1880 (1935) has a historian ventured to structure a political history of the entire post-emancipation South around black politics.
-- Jane Dailey Chicago Tribune


The broad scope of this study and Hahn's ability to articulate the complex characteristics of African American political origins and growth supersedes Eric Foner's seminal work or any other more specialized study on the era.
-- B. A. Wineman Choice


Steven Hahn's meticulously researched, richly detailed history of the black political tradition is a book of the first importance, for the author demonstrates how recently freed slaves drew on their experiences under the peculiar institution to create political communities. He explains how they responded to black nationalism, formed alliances across geographical and cultural divisions, and eventually gained rights previously denied them. This outstanding book should win more than one prize.
-- Lee Milazzo Dallas Morning News


Hahn's book demonstrates that from slavery to the Great Migration of the last century, African Americans were astute politicians, using alliances with the good and bad to ensure socioeconomic and political success. But first and foremost the author reveals for his readers how blacks dealt with the dynamics of change in the post-Civil War South as it impacted their daily lives.
-- A. J. Williams-Myers MultiCultural Review


Drawing synthetically but fruitfully on a vast scholarship on slavery, emancipation, and the New South, it will likely become required reading, if not for the general public, then at least for students of American history. Those readers will encounter an elegantly written, deeply moving, powerful statement of black humanity and black agency in the momentous struggles to end slavery and to define freedom.
-- Eric Arnesen The Nation


Hahn's work links periods normally considered distinct and even autonomous in scholarly studies of African-American lifeAlong the way he introduces us to a cast of remarkable characters who labored relatively anonymously but heroically to give meaning to black Americans' visions for freedomHahn's compelling narrative shows how black workers and their political and social leaders "energized the meaning of democracy" and forced the nation to confront "deep historical problems" that have resided at the heart of the American polity (10). This majestic and impassioned narrative is perhaps the deepest and most penetrating exploration we have of the long pre-history of the twentieth-century civil rights movement.
-- Paul Harvey New York Journal of American History


In Steven Hahn's Pulitzer Prize-winning A Nation Under Our Feet, the aims and organization of black political agency from the final years of slavery into the early twentieth century receive a sweeping reassessment...The Great Migration of African Americans from the rural South to towns and then to the North had its roots in the 1890s and progressed sharply during World War One...Both those who moved to other regions and those who remained in the South maintained a collective identity, but they also held on to the promise that American democracy was meant to cross racial boundaries. With a wealth of evidentiary detail and lucid prose, Hahn confronts the challenges made to that promise in an engaging and cohesive work.
-- Scott Taylor Morris Southern Historian


A compact but challenging volume...Hahn looks at the complex way the African-American struggle for emancipation took shape both under slavery and in the wake of its abolition...Only the most small-minded conception of American life would assume that these are matters of interest only to black readers. In a healthy culture, this little book would be a best-seller.
-- Scott McLemee Inside Higher Ed

TABLE OF CONTENTS
Cover
Title Page
Copyright
Dedication
Contents
Prologue: Looking Out from Slavery
Part 1. “The Jacobins of the Country”
Chapter 1. Of Chains and Threads
Chapter 2. “The Choked Voice of a Race at Last Unloosed”
Chapter 3. Of Rumors and Revelations
Part 2. To Build a New Jerusalem
Chapter 4. Reconstructing the Body Politic
Chapter 5. “A Society Turned Bottomside Up”
Chapter 6. Of Paramilitary Politics
Part 3. The Unvanquished
Chapter 7. The Education of Henry Adams
Chapter 8. Of Ballots and Biracialism
Chapter 9. The Valley and the Shadows
Epilogue: “Up, You Mighty Race”
Appendix: Black Leaders Data Set
Notes
Acknowledgments
Index