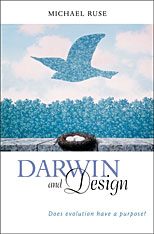 The intricate forms of living things bespeak design, and thus a creator: nearly 150 years after Darwin's theory of natural selection called this argument into question, we still speak of life in terms of design--the function of the eye, the purpose of the webbed foot, the design of the fins. Why is the "argument from design" so tenacious, and does Darwinism--itself still evolving after all these years--necessarily undo it?

The definitive work on these contentious questions, Darwin and Design surveys the argument from design from its introduction by the Greeks, through the coming of Darwinism, down to the present day. In clear, non-technical language Michael Ruse, a well-known authority on the history and philosophy of Darwinism, offers a full and fair assessment of the status of the argument from design in light of both the advances of modern evolutionary biology and the thinking of today's philosophers--with special attention given to the supporters and critics of "intelligent design."

The first comprehensive history and exposition of Western thought about design in the natural world, this important work suggests directions for our thinking as we move into the twenty-first century. A thoroughgoing guide to a perennially controversial issue, the book makes its own substantial contribution to the ongoing debate about the relationship between science and religion, and between evolution and its religious critics.

REVIEWS
Ruse examines the concept of 'design' in nature, explaining why it still remains a strong influence despite the scientific revolution, and historically, how it dominated Western thought from ancient Greece (Plato) to the advent and predominance of Christianity...A rich and compelling book.
-- J. S. Schwartz Choice


Anyone who is interested in the 'science wars' controversy or the history of evolutionary thought will find this book fascinating and rewarding. The prose is masterfill--relaxed, colloquial, rich in information, and suffused with flashes of malicious wit and delicious historical tidbits.
-- Matt Cartmill Reports of the National Center for Science Education


To anyone interested in the evolution of evolution, I recommend this book.
-- John Tyler Bonner Natural History


This has to be the best of Ruse's many books, and it is hard to imagine how a better one could be written on this subject. With an understanding erudition spiced with good-natured wit and occasional sly ribaldry, Ruse moves easily and assuredly among biology, philosophy, history, and theology.
-- Robert T. Pennock Science


Michael Ruse's latest book, Darwin and Design, is an intellectual history of the design argument and its Darwinian solution...His story is a fascinating one, enlivened especially by his accounts of various imaginative attempts before Darwin to solve the design problem without recourse to a deity.
-- Daniel W. McShea American Scientist

TABLE OF CONTENTS
Contents
Preface
Introduction
1. Two Thousand Years of Design
2. Paley and Kant Fight Back
3. Sowing the Seeds of Evolution
4. A Plurality of Problems
5. Charles Darwin
6. A Subject Too Profound
7. Darwinian against Darwinian
8. The Century of Evolutionism
9. Adaptation in Action
10. Theory and Test
11. Formalism Redux
12. From Function to Design
13. Design as Metaphor
14. Natural Theology Evolves
15. Turning Back the Clock
Sources and Suggested Reading
Illustration Credits
Acknowledgments
Index