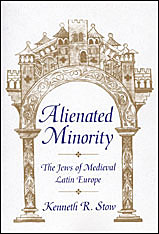 This narrative history surveying one thousand years of Jewish life integrates the Jewish experience into the context of the overall culture and society of medieval Europe. It presents a new picture of the interaction between Christians and Jews in this tumultuous era.Alienated Minority shows us what it meant to be a Jew in Europe in the Middle Ages. The story begins in the fifth century, when autonomous Jewish rule in Palestine came to a close, and when the papacy, led by Gregory the Great, established enduring principles regarding Christian policy toward Jews. Kenneth Stow examines the structures of self-government in the European Jewish community and the centrality of emerging concepts of representation. He studies economic enterprise, especially banking; constructs a clear image of the medieval Jewish family; and portrays in detail the very rich Jewish intellectual life.Analyzing policies of Church and State in the Middle Ages, Stow argues that a firmly defined legal and constitutional position of the Jewish minority in the earlier period gave way to a legal status created expressly for Jews, who in the later period were seen as inimical to the common good. It was this special status that paved the way for the royal expulsions of Jews that began at the end of the thirteenth century.
REVIEWS
[An] enlightening and learned book.
-- Mark Miller Forward


What has heretofore been lacking both to students of medieval Jewish history and to general historians is a manageable, yet indepth, analysis in English of the medieval Jewish experience. Stow provides such a study.
-- Steven Bowman Religious Studies Review