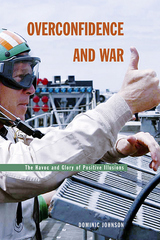 Opponents rarely go to war without thinking they can win--and clearly, one side must be wrong. This conundrum lies at the heart of the so-called "war puzzle": rational states should agree on their differences in power and thus not fight. But as Dominic Johnson argues in Overconfidence and War, states are no more rational than people, who are susceptible to exaggerated ideas of their own virtue, of their ability to control events, and of the future. By looking at this bias--called "positive illusions"--as it figures in evolutionary biology, psychology, and the politics of international conflict, this book offers compelling insights into why states wage war.

Johnson traces the effects of positive illusions on four turning points in twentieth-century history: two that erupted into war (World War I and Vietnam); and two that did not (the Munich crisis and the Cuban missile crisis). Examining the two wars, he shows how positive illusions have filtered into politics, causing leaders to overestimate themselves and underestimate their adversaries--and to resort to violence to settle a conflict against unreasonable odds. In the Munich and Cuban missile crises, he shows how lessening positive illusions may allow leaders to pursue peaceful solutions.

The human tendency toward overconfidence may have been favored by natural selection throughout our evolutionary history because of the advantages it conferred--heightening combat performance or improving one's ability to bluff an opponent. And yet, as this book suggests--and as the recent conflict in Iraq bears out--in the modern world the consequences of this evolutionary legacy are potentially deadly.


Overconfidence and War is a fascinating and insightful analysis. Its skillful blend of history, psychology, and evolutionary biology is a model for a new kind of social analysis, one that will have increasing prominence in the years to come.
-- Steven Pinker, author of How the Mind Works and The Blank Slate


The puzzle of why countries go to war is a puzzle only for those who assume that humans are calculating machines. Dominic Johnson provides a scientific foundation for understanding how humans really make decisions about the most important questions they face. We need more books like Overconfidence and War.
-- Stephen Peter Rosen, Harvard University


This is an important book, both timely and of enduring value. It traces in detail the dreadful connection between self-deception and human warfare and suggests the kinds of thinking we must guard against if we are to avoid war. Read this book in hopes of a better, more conscious day-a day when we will not blunder so easily and stupidly off the first cliff inviting us to war.
-- Robert Trivers


Dominic Johnson's attack on the war puzzle is novel, convincing, and appealing. Steeped in sound biology and a detailed account of key well-documented conflicts, Overconfidence and War marks an important advance in the long-anticipated integration of political science and evolutionary theory.
-- Richard Wrangham, co-author of Demonic Males


Johnson applies the logic of evolution to international relations. Following one of his mentors, the Harvard anthropologist Richard Wrangham, he suggests that overconfidence might once have been helpful in war and conflict. On the ancient African savannah, it was actually rational to misestimate your own capacities: a fearsome appearance and bold tactics could intimidate the enemy and help carry the day during lightning raids on enemy camps. But today, given modern weaponry, bureaucratic planning and mass armies, a cocky disposition is as likely to be suicidal as it is glorious. Military overconfidence, in other words, is a psychological holdover--a cognitive appendix--from an earlier period in human history. It is perhaps most dangerous when it prompts a decision for war in the first place. And it could be the X-factor explaining the otherwise inexplicable in recent military history: French faith in the Maginot line, Hitler's drive into Russia, the American failure to heed the lessons of French defeat in Vietnam. Most humans are prone to overestimating themselves, but leaders (who are inordinately ambitious and, by definition, have suffered few recent professional setbacks) are especially susceptible. Fittingly, the cover of Johnson's book features George W. Bush in the famous flight suit, flashing an exuberant thumbs-up.
-- Christopher Shea New York Times Magazine