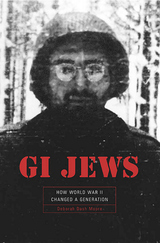 Whether they came from Sioux Falls or the Bronx, over half a million Jews entered the U.S. armed forces during the Second World War. Uprooted from their working- and middle-class neighborhoods, they joined every branch of the military and saw action on all fronts. Deborah Dash Moore offers an unprecedented view of the struggles these GI Jews faced, having to battle not only the enemy but also the prejudices of their fellow soldiers.

Through memoirs, oral histories, and letters, Moore charts the lives of fifteen young Jewish men as they faced military service and tried to make sense of its demands. From confronting pork chops to enduring front-line combat, from the temporary solace of Jewish worship to harrowing encounters with death camp survivors, we come to understand how these soldiers wrestled with what it meant to be an American and a Jew.

Moore shows how military service in World War II transformed this generation of Jews, reshaping Jewish life in America and abroad. These men challenged perceptions of Jews as simply victims of the war, and encouraged Jews throughout the diaspora to fight for what was right. At the same time, service strengthened Jews' identification with American democratic ideals, even as it confirmed the importance of their Jewish identity. GI Jews is a powerful, intimate portrayal of the costs of a conflict that was at once physical, emotional, and spiritual, as well as its profound consequences for these hitherto overlooked members of the "greatest generation."

REVIEWS
Rich in detail and insight, this deeply affecting book pays tribute to both the unsung heroism of the American Jewish servicemen of World War II and to the historian's craft. A must read for anyone whose grandfather, father, brother, uncle and cousins proudly lay claim to being a 'GI Jew.'
-- Jenna Weissman Joselit, author of The Wonders of America: Reinventing Jewish Culture, 1880-1950


Imagine yourself a young man just become an American soldier in World War II, burdened by the same anxieties and fears of those around you but compelled to overcome by your bearing virulent stereotypes of those like you - - as weaklings, malingerers, cowards. How Jewish GIs fought prejudice, won respect and in the process strengthened their identities as Americans and as Jews is the fascinating and exceptionally well-told story Deborah Dash Moore offers us in GI Jews.
-- Gerald Linderman, author of The World within War: America's Combat Experience in World War II


GI Jews recounts the story of American Jews in World War II and explains why that story matters. Based on a wealth of interviews and contemporary letters, this gracefully-written work stands as a monument to American Jewry's own 'greatest generation.'
-- Jonathan D. Sarna, author of American Judaism: A History


World War II profoundly changed the face of American society. So too did it dramatically change the lives of the Jewish GIs who served in the American military. Deborah Dash Moore's powerful portrayal of their experience illuminates that change. It is a fascinating and important story and Moore tells it in a compelling fashion.
-- Deborah E. Lipstadt, author of Denying the Holocaust: The Growing Assault on Truth and Memory


Serving in WWII made American Jewish soldiers feel both more Jewish and more American, writes historian Moore in this insightful study. Relying mainly on memoirs and oral interviews of 15 veterans, Moore shows how many of them had taken their Jewish identity for granted in the Jewish enclaves where they grew up...The stories these soldiers tell are compelling, and Moore does an admirable job of knowing when to interpret and when to let the experiences speak for themselves.
-- Publishers Weekly


In this impressively written book, Moore takes as her focus a number of Jewish individuals--among them rabbis, college graduates, manual laborers, and her own father--and demonstrates how military service in World War II transformed their worldviews. The transformation often began during military training, where many Jews broke out of their insular ethnic world and discovered the diversity of America. During their military service, they confronted anti-Semitism, racism, the fear of combat, the loneliness of being a minority, and the challenge of living a Jewish life in a military that regarded ham products as one of the four basic food groups. Moore's greatest strength is her ability to integrate the story of the individual into the wider issues facing America. In the process, she helps lay to rest the notion that there was a single Jewish response to the wartime experience.
-- Frederic Krome Library Journal


Moore has produced a lucid account of Jewish military service during World War II, telling her tale largely through the experiences of 15 Jewish soldiers, including her own father...Deborah Dash Moore ably conveys the subtleties and intricacies of why my father and others serving during World War II did not surrender or feel compelled to hide their Jewishness. Throughout her narrative, she points out that military service empowered these young men as Jews as well as Americans.
-- Judy Bolton-Fasman Jerusalem Report


The great surprise of the season in World War II books is Deborah Dash Moore's wonderful GI Jews: How World War II Changed a Generation...It is an enjoyable read. Moore, a Vassar professor, writes well and knows how to tell a story...She has an eye for interesting characters and for what makes them interesting...She keeps up a lively pace and intersperses evocative vignettes with insightful analysis of what these Jewish troops' experiences meant to them, their families, their communities and the nation as a whole...For postwar generations, her book reveals how the experience of the war changed the generation that fought it and why it helped launch the civil rights movement, the Great Society and America's rise to global predominance. GI Jews should not be missed by anyone with an interest in World War II or the history of the American people.
-- Kenneth M. Pollack Washington Post Book World


Moore's history demonstrates just how significant soldiering was to the full acceptance of Jews in the U.S....[A] trenchant and fluent book...As Moore deftly weaves a narrative from the varied experiences of her informants--tracking them from Hitler's invasion of Poland in 1939 to battlefield victory and the liberation of the death camps in 1945--she refuses to merely celebrate. Her book includes instances of anti-Semitism in boot camp here and on the fronts overseas. In one especially searing moment, a Jewish chaplain is excluded from an ecumenical memorial service after the battle for Iwo Jima because he is an outspoken foe of racial segregation in the American military. Such unclouded vision makes Moore all the more credible in describing the more-common process of Jews proving their mettle to gentiles and securing their place in a more-tolerant postwar America.
-- Samuel G. Freedman Chicago Tribune