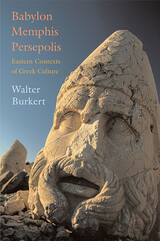 At the distant beginning of Western civilization, according to European tradition, Greece stands as an insular, isolated, near-miracle of burgeoning culture. This book traverses the ancient world's three great centers of cultural exchange--Babylonian Nineveh, Egyptian Memphis, and Iranian Persepolis--to situate classical Greece in its proper historical place, at the Western margin of a more comprehensive Near Eastern-Aegean cultural community that emerged in the Bronze Age and expanded westward in the first millennium B.C.

In concise and inviting fashion, Walter Burkert lays out the essential evidence for this ongoing reinterpretation of Greek culture. In particular, he points to the critical role of the development of writing in the ancient Near East, from the achievement of cuneiform in the Bronze Age to the rise of the alphabet after 1000 B.C. From the invention and diffusion of alphabetic writing, a series of cultural encounters between "Oriental" and Greek followed. Burkert details how the Assyrian influences of Phoenician and Anatolian intermediaries, the emerging fascination with Egypt, and the Persian conquests in Ionia make themselves felt in the poetry of Homer and his gods, in the mythic foundations of Greek cults, and in the first steps toward philosophy. A journey through the fluid borderlines of the Near East and Europe, with new and shifting perspectives on the cultural exchanges these produced, this book offers a clear view of the multicultural field upon which the Greek heritage that formed Western civilization first appeared.

REVIEWS
Mr. Burkert is something of a mage himself; not only a 'wise man' and astonishingly learned, but a superb initiator into mysteries gleaned from recondite sources in dozens of dead languages. By bringing these lost or forgotten texts into vivid conjunction, he summons the past to life in all its unexpected intricacy. He shows us that the Greeks, whom we thought we knew, were stranger, and more wonderful, than we could have suspected.
-- Eric Ormsby New York Sun


Babylon, Memphis, Persepolis is a unique survey of the thought-world of the ancient Near East and Mediterranean. There is an insight in almost every sentence, a challenge in every paragraph, and a lifetime of study in every chapter. The author manages this without losing his sense of wonder, and this is the greatest achievement of the book.
-- John Ray Times Literary Supplement


It is a fascinating and magisterial account of just how far we have moved away from Greek exceptionalism without in any way denigrating the achievement of the Greeks...The Greek miracle lay not in a Hellenism that was exclusively Greek, but rather in its transforming embrace of Near Eastern myth and thought. No one else ever achieved what the Greeks achieved, but they did not do it alone. And Walter Burkert is the modern magus who has brought us this revelation.
-- G. W. Bowersock New Republic


Babylon, Memphis, Persepolis: Eastern Contexts of Greek Culture reflects its origin as a lecture series and reads smoothly, with Burkert's prodigious scholarship made manifest in the 30 pages of endnotes. For those unconvinced by Bernal, this wide-ranging andscholarly demonstration that Greek culture did not emerge in isolation might just be the right book.
-- John Bennet Times Higher Education Supplement


In this elegantly written, meticulously argued, and honest book, Burkert not only summarizes and adds to our knowledge of the how, why, and what of cultural influences on Greece from the Near East, Egypt, and Persia, mainly during the Archaic and Classical Periods, but also demonstrates to his readers the right way to study this fascinating topic. In other words, the work provides a methodological model for all who wish to pursue its subject.
-- Molly M. Levine Bryn Mawr Classical Review