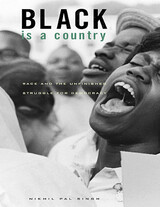 Despite black gains in modern America, the end of racism is not yet in sight. Nikhil Pal Singh asks what happened to the worldly and radical visions of equality that animated black intellectual activists from W. E. B. Du Bois in the 1930s to Martin Luther King, Jr. in the 1960s. In so doing, he constructs an alternative history of civil rights in the twentieth century, a long civil rights era, in which radical hopes and global dreams are recognized as central to the history of black struggle.

It is through the words and thought of key black intellectuals, like Du Bois, Ralph Bunche, C. L. R. James, Richard Wright, Ralph Ellison, Langston Hughes, and others, as well as movement activists like Malcolm X and Black Panthers, that vital new ideas emerged and circulated. Their most important achievement was to create and sustain a vibrant, black public sphere broadly critical of U.S. social, political, and civic inequality.

Finding racism hidden within the universalizing tones of reform-minded liberalism at home and global democratic imperatives abroad, race radicals alienated many who saw them as dangerous and separatist. Few wanted to hear their message then, or even now, and yet, as Singh argues, their passionate skepticism about the limits of U.S. democracy remains as indispensable to a meaningful reconstruction of racial equality and universal political ideals today as it ever was.

REVIEWS
Reflecting several new trends in current scholarship, Singh provides a provocative contribution to civil rights literature. He focuses on a ‘Long Civil Rights Movement,’ which for him covers the New Deal through the Great Society and into the 1970s. The roles of Communism, anti-Communism, and the Cold War loom large as impediments to a radical social change that might have led to an alternate form of black empowerment… As an intellectual history of the long Civil Rights era and exploration of paths not taken as much as those that were, this book stands out. This important contribution places the idea of race as a political idea at the forefront, and will challenge and provoke scholars and students alike.
-- D. C. Catsam Choice


Singh argues persuasively that the black struggle for social justice has been for universal rights that benefit the nation as a whole and can represent a model of democracy. His historiography and analysis are important and represent a new generation of historians examining the Civil Rights Movement and race in America from fresh perspectives.
-- Sherri L. Barnes Library Journal


In this passionate, conscientiously documented and scholarly work, University of Washington historian Singh reaches beyond the ‘short civil rights era’ (roughly 1954 to the mid-’60s) to recover ‘the more complex and contentious racial history of the long civil rights era,’ reaching from the New Deal to the Great Society… As a historical manifesto, this significant contribution to black intellectual history leads directly to the conclusion that current demand for color-blind policy ‘is a product of the steady erasure of the legacy of the unfinished struggles against white supremacy.’… The analysis of political philosophy for the period makes a first-rate contribution to African-American intellectual history.
-- Publishers Weekly


Black Is a Country is an elegant account of the paradoxical relationship between race as a resource of hope and racism as an enduring curse at the core of this country’s cultural and political imagination. In lucid and often lyrical prose, Nikhil Singh argues that race functions as a highly durable and oppressive technology yet race simultaneously provided a political space for 20th century intellectuals and activists to enlarge upon the public meaning of words like freedom and democracy. Black Is a Country deserves to be widely read; it is the work of a gifted young scholar that promises to provoke a rethinking of classic liberal accounts of race, class and democracy.
-- Lani Guinier, Harvard Law School, coauthor of The Miner’s Canary


Black Is a Country is a work of great urgency; it is one of those books you carry with you, read over and over again, and quote often. Nikhil Singh puts to rest our national founding myth that America was always a source of ‘justice for all.’ Instead, he finds within the black radical critique of U.S. racial capitalism a more inclusive, global, and universalist vision which has the potential of renewing democracy and dismantling racism once and for all.
-- Robin D. G. Kelley, Columbia University, author of Freedom Dreams


Black Is a Country is a beautifully, written, elegantly argued, and exhaustively researched study of the links between African American social movements and new ways of knowing. From his skilled exegesis of 1930s writings by W. E. B. Du Bois through provocative arguments about the prominence of the Black Panther Party during the 1960s to his sophisticated understanding of the limits of both multiculturalism and ‘color blind’ interchangeability, Singh presents challenging, original, and persuasive interpretations of topics that are much discussed but little understood. This is a splendid book, one that will be widely read, frequently taught, and often cited.
-- George Lipsitz, University of California, Santa Cruz


Black Is a Country is a rare work that succeeds both as theory and as history. Reading and researching widely in movement history, political economy and above all in the writings, speeches and styles of Black intellectuals and activists in the 20th century, Singh shows how African American thinkers and organizers literally made history from the edges. His book should be read by all those who care about how U.S. freedom movements fit into worlds of race.
-- David R. Roediger, University of Illinois at Urbana-Champaign