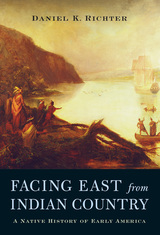 In the beginning, North America was Indian country. But only in the beginning. After the opening act of the great national drama, Native Americans yielded to the westward rush of European settlers. Or so the story usually goes. Yet, for three centuries after Columbus, Native people controlled most of eastern North America and profoundly shaped its destiny. In Facing East from Indian Country, Daniel K. Richter keeps Native people center-stage throughout the story of the origins of the United States.

Viewed from Indian country, the sixteenth century was an era in which Native people discovered Europeans and struggled to make sense of a new world. Well into the seventeenth century, the most profound challenges to Indian life came less from the arrival of a relative handful of European colonists than from the biological, economic, and environmental forces the newcomers unleashed. Drawing upon their own traditions, Indian communities reinvented themselves and carved out a place in a world dominated by transatlantic European empires. In 1776, however, when some of Britain’s colonists rebelled against that imperial world, they overturned the system that had made Euro-American and Native coexistence possible. Eastern North America only ceased to be an Indian country because the revolutionaries denied the continent’s first peoples a place in the nation they were creating.

In rediscovering early America as Indian country, Richter employs the historian’s craft to challenge cherished assumptions about times and places we thought we knew well, revealing Native American experiences at the core of the nation’s birth and identity.

REVIEWS
Thanks to the work of Richter and others like him who have set out to break with the traditional Eurocentric narrative, ‘the people without history’ have been given back their voice.
-- J. H. Elliott New York Review of Books


In his acclaimed volume Facing East from Indian Country, Daniel Richter turns the tables on ‘conventional’ histories of early European–Indian relations by looking east from the Mississippi River rather than west from the Atlantic Ocean… Richter approaches, from the Indian perspective, the history of early contact with Europeans through the founding of the U. S., with emphasis on tribes’ immeasurable contribution to the history of the continent. He culls Native voices from surviving documents and records, pulling Indians from the periphery of white America’s memory and making them the focal point of the post-contact story.
-- Tom Wanamaker Indian Country Today


Richter insists that we must look over the shoulders of American Indians to see the Europeans who settled the New World to have a complete understanding of our origins. His depiction of how these original Americans adapted to the newcomers and how they were inevitably betrayed by generations devoted to ‘freedom’ and ‘opportunity’ are especially telling.
-- Denver Post and Rocky Mountain News


Most American histories treat North America’s indigenous peoples as ancillary to the more important story of the establishment of a European nation in the New World. What would happen if one shifted focus and transformed the usual bit-players into stars? Richter…makes that shift and produces what may, for its impeccable use of primary sources, smoothly well-wrought prose, and passionate argument, become a classic.
-- Patricia Monaghan Booklist


An excellent, ambitious attempt to restore to history long-overlooked Indians who ‘neither uncompromisingly resisted…nor wholeheartedly assimilated’ in the face of white encroachment… A hallmark in recent Native American historiography that merits wide attention.
-- Kirkus Reviews


Richter here offers a masterly work that eschews the long-standing perception that Native Americans were nothing more than marginalized bystanders as Europeans colonized North America. Focusing on the period between the 15th and 18th centuries, the author instead shows that Native American communities adapted to the many stresses introduced by the arrival of the Europeans and were active participants in creating a new way of life on the continent… [He] provides a valuable perspective that is often overlooked in books about the same period. Highly recommended for all public and academic libraries.
-- John Burch Library Journal


At the center of this bold and thoroughly astonishing history of Native Americans are narratives of three Indians generally known to Euro-Americans: Pocahontas, Blessed Catherine Tekakwitha, and the Algonquin warrior Metacom, also known as King Philip. Telling each of these stories—a romance, the life of a saint, the destruction of a ‘noble savage’—from the European and then the Native American perspective, Richter elucidates an alternative history of America from Columbus to just after the Revolution… Gracefully written and argued, Richter’s compelling research and provocative claims make this an important addition to the literature for general readers of both Native American and U.S. studies.
-- Publishers Weekly


Richter offers a brilliant retelling of the old stories of European colonies and empires through Native eyes. Facing East from Indian Country may be as close as any scholar has come to synthesizing an ‘Indian perspective’ on early American history. This is a book not to be missed.
-- Philip J. Deloria, author of Playing Indian


From its title to its very last page, Facing East from Indian Country spins us around. But rather than dizzying, this turnabout is clarifying, freeing us from the blinders of a European perspective on the early American experience. Vast in scope yet intimate in its attention to particular people, places, and moments, Richter’s book is a moving, thought-provoking work of scholarship.
-- James H. Merrell, author of Into the American Woods: Negotiators on the Pennsylvania Frontier


With keen insight, deep reading, and a sparkling wit, Richter makes new and compelling sense of American history, radically shifting our perspective on the past. Balancing vivid imagination and a respect for the unknown, Richter crafts a powerful and engaging story that is essential to understanding our place in time on this continent.
-- Alan Taylor, author of William Cooper’s Town: Power and Persuasion on the Frontier of the Early American Republic