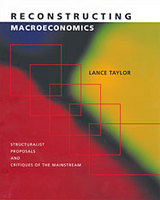 Macroeconomics is in disarray. No one approach is dominant, and an increasing divide between theory and empirics is evident.

This book presents both a critique of mainstream macroeconomics from a structuralist perspective and an exposition of modern structuralist approaches. The fundamental assumption of structuralism is that it is impossible to understand a macroeconomy without understanding its major institutions and distributive relationships across productive sectors and social groups.

Lance Taylor focuses his critique on mainstream monetarist, new classical, new Keynesian, and growth models. He examines them from a historical perspective, tracing monetarism from its eighteenth-century roots and comparing current monetarist and new classical models with those of the post-Wicksellian, pre-Keynesian generation of macroeconomists. He contrasts the new Keynesian vision with Keynes's General Theory, and analyzes contemporary growth theories against long traditions of thought about economic development and structural change.

REVIEWS
Reconstructing Macroeconomics is a stunning intellectual achievement. It surveys an astonishing range of macroeconomic problems and approaches in a compact, coherent critical framework with unfailing depth, wit, and subtlety. Lance Taylor's pathbreaking work in structural macroeconomics and econometrics sets challenging standards of rigor, realism, and insight for the field. Taylor shows why the structuralist and Keynesian insistence on putting accounting consistency, income distribution, and aggregate demand at the center of macroeconomic analysis is indispensable to understanding real-world macroeconomic events in both developing and developed economies. The book is full of new results, modeling techniques, and shrewd suggestions for further research. Taylor's scrupulous and balanced appraisal of the whole range of macroeconomic schools of thought will be a source of new perspectives to macroeconomists of every persuasion.
-- Duncan K. Foley, New School University


Lance Taylor has produced a masterful and comprehensive critical survey of existing macro models, both mainstream and structuralist, which breaks considerable new ground. The pace is brisk, the level is high, and the writing is entertaining. The author's sense of humor and literary references enliven the discussion of otherwise arcane and technical, but extremely important, issues in macro theory. This book is sure to become a standard reference that future generations of macroeconomists will refer to for decades to come.
-- Robert Blecker, American University


While there are other books dealing with heterodox macroeconomics, this book surpasses them all in the quality of its presentation and in the careful treatment and criticism of orthodox macroeconomics including its recent contributions. The book is unique in the way it systematically covers heterodox growth theory and its relations to other aspects of heterodox macroeconomics using a common organizing framework in terms of accounting relations, and in the way it compares the theories with mainstream contributions. Another positive and novel feature of the book is that it takes a long view of the development of economic ideas, which leads to a more accurate appreciation of the real contributions by recent theoretical developments than is possible in a presentation that ignores the history of macroeconomics.
-- Amitava Dutt, University of Notre Dame