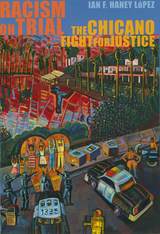 In 1968, ten thousand students marched in protest over the terrible conditions prevalent in the high schools of East Los Angeles, the largest Mexican community in the United States. Chanting "Chicano Power," the young insurgents not only demanded change but heralded a new racial politics. Frustrated with the previous generation's efforts to win equal treatment by portraying themselves as racially white, the Chicano protesters demanded justice as proud members of a brown race. The legacy of this fundamental shift continues to this day.

Ian Haney López tells the compelling story of the Chicano movement in Los Angeles by following two criminal trials, including one arising from the student walkouts. He demonstrates how racial prejudice led to police brutality and judicial discrimination that in turn spurred Chicano militancy. He also shows that legal violence helped to convince Chicano activists that they were nonwhite, thereby encouraging their use of racial ideas to redefine their aspirations, culture, and selves. In a groundbreaking advance that further connects legal racism and racial politics, Haney López describes how race functions as "common sense," a set of ideas that we take for granted in our daily lives. This racial common sense, Haney López argues, largely explains why racism and racial affiliation persist today.

By tracing the fluid position of Mexican Americans on the divide between white and nonwhite, describing the role of legal violence in producing racial identities, and detailing the commonsense nature of race, Haney López offers a much needed, potentially liberating way to rethink race in the United States.

REVIEWS
Racism on Trial is a fascinating and thought-provoking study that adds much to our understanding of the Chicano movement and points to the centrality of race in America. By arguing that racism is common sense, Haney López provides a useful model that can be applied to American history as a whole and in so doing redirect our notions of the construction of race and racism in the United States… [A] fine book that will have a profound influence on the study of legal, ethnic, and American history for years to come.
-- Ernesto Chavez American Journal of Legal History


At the heart of this book is a compelling examination of the ways in which their treatment by the police and the courts persuaded Chicanos to abandon the claim to be white and to fashion their own racial identity.
-- M. J. Heale History


Haney López’s evidentiary presentation is the highlight of the book. Unlike many social scientists, he realizes he has the burden of proof… Ian F. Haney López’s work contributes significantly to the understanding of the period.
-- Rodolfo F. Acuña Journal of American History


Haney López transcends the history and politics of the Chicano movement and exposes the underlying ‘common sense racism’ on which he blames the extraordinary rate of exclusion of Latinos from grand jury service in L.A.… Racism on Trial bridges the issues of race relations, protest movements, and the law with conviction and clarity.
-- José Luis Sánchez Multicultural Review


No one has better explained how court practices, educational inequities, and police behavior ignited a ‘brown power’ movement that took its grievances to the courts as well as to the streets. A must-read for those interested in the racial place of Hispanics in a black and white nation.
-- Neil Foley, University of Texas


An astonishingly lucid and significant contribution to current discussions of race, Racism on Trial underscores our common reliance on everyday racial ideas that remain unquestioned. This fine book could well blast through the racial impasse which our country faces and lead, in the end, to real transformation and equality.
-- Gregory J. Boyle, S.J., Executive Director, Homeboy Industries, Los Angeles


Locating his argument in distinctly American ideas about racial identity, [Haney López] looks closely at pivotal events in the development of Chicano racial consciousness and illuminates the subversive role that common sense plays in racism and racial prejudice. This book is essential reading for people looking for a way out of the black–white conception of race that has dominated social discourse, without resorting to colorblindness.
-- Lani Guinier and Gerald Torres, authors of The Miner’s Canary


Racism on Trial is an absolutely dazzling piece of legal scholarship that chronicles the rise of the Chicano movement in Los Angeles and explains the Mexicans’ transformation into a brown race from one that had long asserted its whiteness. Haney López deftly seeks the movement’s roots in poverty, urban violence, segregation, and educational neglect, elaborating a robust theory of a common sense racism that greatly illuminates our understanding of discrimination.
-- Ramón A. Gutiérrez, University of California, San Diego


Haney López invites us to confront our hauntingly evocative past and the pernicious nature of common sense racism in our legal institutions. He underscores just how much racial prejudice still greets Mexicans and Chicanos across the United States, and how it must be met by renewed efforts to gain fully equal citizenship.
-- Gerald P. López, New York University Law School


In Racism on Trial, Ian Haney López dissects two prominent legal cases handled by controversial lawyer-activist Oscar Zeta Acosta in the late 1960s—the trials of the East LA Thirteen and the Biltmore Six—in order to reconstruct and interpret the Chicano Movement period in Los Angeles. The result is a provocative and engaging mix of legal analysis, civil rights history, and the sociology of legal violence and racial identities. This is essential reading for those interested in Anglo–Mexican relations in California and the Southwest.
-- David Montejano, University of California, Berkeley