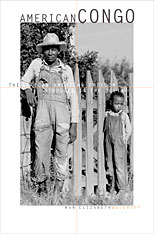 This is the story of how rural Black people struggled against the oppressive sharecropping system of the Arkansas and Mississippi Delta during the first half of the twentieth century. Here, white planters forged a world of terror and poverty for Black workers, one that resembled the horrific deprivations of the African Congo under Belgium’s King Leopold II.

Delta planters did not cut off the heads and hands of their African American workers but, aided by local law enforcement, they engaged in peonage, murder, theft, and disfranchisement. As individuals and through collective struggle, in conjunction with national organizations like the NAACP and local groups like the Southern Tenant Farmers’ Union, Black men and women fought back, demanding a just return for their crops and laying claim to a democratic vision of citizenship. Their efforts were amplified by the two world wars and the depression, which expanded the mobility and economic opportunities of Black people and provoked federal involvement in the region.

Nan Woodruff shows how the freedom fighters of the 1960s would draw on this half-century tradition of protest, thus expanding our standard notions of the civil rights movement and illuminating a neglected but significant slice of the American Black experience.

REVIEWS
Woodruff’s book stands out for its attempt to situate the white supremacist regime of the Mississippi Delta within a national and international context… Woodruff does offer compelling evidence…for her point that racial terrorism characterized labor relations in both the African and American Congo, and her effort to connect African American resistance in the Delta to colonized peoples’ resistance in other locations is welcome. With its pointed argument and solid base in a range of manuscript sources and oral histories, American Congo speaks to a wide audience. It has broad appeal for readers interested in twentieth-century American history and is particularly important for students of the modern African American struggle for freedom… She also explicates the significant ways in which it changed over time, noting that the struggle persisted across the decades, but in a constantly evolving form. This point, combined with the comparative aspects of Woodruff’s study, makes it a crucial addition to the literature.
-- Alisa Y. Harrison North Carolina Historical Review


Woodruff argues that the economic development of the Mississippi Delta lands in the early 20th century resembled the exploitation of African colonies by European capitalism. This involved the subjugation of a largely nonwhite labor force through the near total control of both the economic and local political systems and reflected the application of modern capital, management, and corporate organizational systems to previously underdeveloped agricultural and extractive economies. The author presents a convincing argument that the economic transformation of the Delta lands combined an enlightened and sophisticated capitalism with an oppressive and exploitative labor system.
-- C. D. Wintz Choice


Woodruff has vividly recreated the brutal local history of the Delta and persuasively situated that history in the context of national politics, global economics, and world wars. This book should be required reading for students of Southern, African American, and labor history.
-- David Montgomery, author of Citizen Worker: The Experience of Workers in the United States with Democracy and the Free Market during the Nineteenth Century


In American Congo Nan Woodruff very rightly places the Mississippi Delta and its racialized political economy in international context. No longer does this heavily-Black, white-supremacist plantation region float in American (and southern) exceptionalism. Her Delta belongs to the colonized world of the twentieth century, rising and failing in rhythm with the colonies of Asia and Africa as a result of the same world wars. In the Delta as in other colonies, struggle proves long, but also fruitful.
-- Nell Irvin Painter, author of Southern History across the Color Line