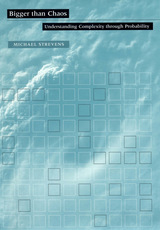 Many complex systems--from immensely complicated ecosystems to minute assemblages of molecules--surprise us with their simple behavior. Consider, for instance, the snowflake, in which a great number of water molecules arrange themselves in patterns with six-way symmetry. How is it that molecules moving seemingly at random become organized according to the simple, six-fold rule? How do the comings, goings, meetings, and eatings of individual animals add up to the simple dynamics of ecosystem populations? More generally, how does complex and seemingly capricious microbehavior generate stable, predictable macrobehavior?

In this book, Michael Strevens aims to explain how simplicity can coexist with, indeed be caused by, the tangled interconnections between a complex system's many parts. At the center of Strevens's explanation is the notion of probability and, more particularly, probabilistic independence. By examining the foundations of statistical reasoning about complex systems such as gases, ecosystems, and certain social systems, Strevens provides an understanding of how simplicity emerges from complexity. Along the way, he draws lessons concerning the low-level explanation of high-level phenomena and the basis for introducing probabilistic concepts into physical theory.

REVIEWS
This book is a model of clarity, at both the 'macro' and the 'micro' levels; the expository style is entertaining without being distracting; the presentation of technical material shows the deft touch of someone who has mastery of it without the inclination to overindulge in it.
-- Ned Hall, Professor of Philosophy, Massachusetts Institute of Technology


This impressive book tackles an important question: how can systems of many interacting parts, which thus display low-level complexity, give rise to high-level simplicity? Said another way: how can very complicated and seemingly capricious micro-behavior generate stable, predictable macro-behavior? Complex systems of the sort Strevens deals with are all around us. Thermodynamics and ecology are just the beginning. He makes real progress on a genuinely difficult topic, one that is of central interest to science and to the philosophy of science. He also has a seemingly effortless command of his materials and a sure grip on the conceptual issues. The work is technically sophisticated--he knows his mathematics, probability theory and physics--and elegantly written. This is what good philosophy is all about.
-- Alan Hájek, Professor of Philosophy, California Institute of Technology


This book is a serious and ambitious effort to explain how complex systems can exhibit simple behaviour...There is much to be learned in reading [Strevens's] book. His attempt to solve the puzzle is serious and provocative. He raises interesting and important issues related to the central puzzle and provides insightful analyses of many of these issues. The work deserves the attention of the philosophical community, particularly those who are interested in the philosophical foundations of probability, physics, biology, or economics.
-- Fred Kronz Metascience