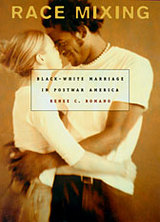 Marriage between blacks and whites is a longstanding and deeply ingrained taboo in American culture. On the eve of World War II, mixed-race marriage was illegal in most states, politicians argued for segregated facilities in order to prevent race mixing, and interracial couples risked public hostility, legal action, even violence. Yet, sixty years later, black-white marriage is no longer illegal or a divisive political issue, and the number of such couples and their mixed-race children has risen dramatically. Renee Romano explains how and why such marriages have gained acceptance, and what this tells us about race relations in contemporary America.

Although significant numbers of both blacks and whites still oppose interracial marriage, larger historical forces have greatly diminished overt racism and shaped a new consciousness about mixed-race families. The social revolutions of the 1950s and '60s (with their emphasis on individualism and nonconformity), the legal sanctions of new civil rights laws, and a decline in the institutional stability of marriage have all contributed to the growing tolerance for interracial relationships. Telling the powerful stories of couples who married across the color line, Romano shows how cultural shifts are lived by individuals, and how they have enabled mixed couples to build supportive communities for themselves and their children.

However, Romano warns that the erosion of this taboo does not mean that racism no longer exists. The history of interracial marriage helps us understand the extent to which America has overcome its racist past, and how much further we must go to achieve meaningful racial equality.

REVIEWS
Though still rare in America, black-white interracial marriage has progressed far from its ostracized and, in many states, criminal status at mid-century. In her first book, Romano...surveys the social and legal environment for interracial marriage in America since World War II...Romano makes clear that shifting social attitudes, rather than law and the courts, have most profoundly impacted interracial relationships...Recommended.
-- Janet Igraham Dwyer Library Journal


Romano's monograph is excellent, and I hope it will gain the large audience that it deserves.
-- Randall Kennedy The Atlantic


Romano examines the deeply embedded taboo of interracial marriage in the U.S. Citing studies, surveys, court accounts, media coverage, and interviews with interracial couples, Romano explores how attitudes have evolved, eventually eroding that taboo, within the last 60 years...Romano outlines the forces that eventually led to the breakdown of the taboo, from the integration of armed services during World War II to the migration of southern blacks to the North for war-related jobs, exploring the political, cultural, and social history of black-white marriages since the 1940s. The interviews are particularly powerful in conveying the challenges of interracial marriages and the changes in social attitudes...But Romano cautions that the increase in black-white marriages does not signify the end of structural racial inequalities in American society.
-- Vanessa Bush Booklist


Renee C. Romano's fine study, Race Mixing, describes how the last 60 years brought us to current attitudes toward mixed-race relationships, which are, at best, increasingly tolerant but still fraught with ignorance and stereotype...She focuses her copious research on places where race mixing is viewed with particular fear or rare favor--schools, the workplace, the military.
-- Kate Manning Los Angeles Book Review


Romano has written a thorough and fascinating study of the U.S.'s legendary obsession with interracial marriage and sex.
-- W. Glasker Choice


Throughout her cogent and extremely readable history of interracial love and marriage since 1940 – which begins at a period, still well within living memory, when such relationships remained illegal in much of America - Romano consistently avoids straightforward liberal triumphalism and remains admirably tentative about drawing sweeping conclusions from her dataAstute and well-judged, Race Mixing is a welcome addition to the study of interracial love in American history, which both offers new information and a new approach. Of particular value is Romano's insistence that even the apparent sweetness of loveis neither apolitical nor "free" but suffused with the race matters that remain paramount to American formations of identity and culture. Race Mixing offers a timely reminder of how far America and the Western world have traveled, and how far they still have to go.
-- Andrew Warnes African-American Review


It is this fear of 'miscegenation,' 'mongrelization,' and the threat posed by allegedly hyper-sexualized 'big black bucks' that makes up the central conflict in Renee Romano's wonderful book, Race Mixing. Romano explores the post-World War II history of interracial marriage, focusing on unions between blacks and whites in the United States. Romano has probed this most vilified of social phenomena in clear, well-written prose and her book is a welcome addition to postwar American social history, and to the burgeoning literature on race, civil rights, ethnicity, gender, and sex (the act as well as the chromosomal configuration). Romano skillfully takes a different focus in each chapter, covering a range of thematic issues while at the same time maintaining a chronological drive that gives the book momentum...It is history at its finest.
-- Derek Catsam H-Net


This historical study, at once galling and hopeful, allows the reader entrée into the lives of people whose marital union is at once a sign of hope and a sign of contradiction...This book is a fine historical overview of a painful human reality.
-- Paul J. Fitzgerald INTAMS

TABLE OF CONTENTS
CONTENTS
Acknowledgments
Prologue: Explaining a Taboo
1 The Unintended Consequences of War
2 The Dangers of “Race Mixing”
3 Ambivalent Acceptance
4 Not Just Commies and Beatniks
5 Culture Wars and Schoolhouse Doors
6 The Rights Revolutions and Interracial Marriage
7 Talking Black and Sleeping White
8 Eroded but Not Erased
Epilogue: Is Love the Answer?
Notes
Index