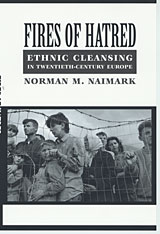 Of all the horrors of the last century—perhaps the bloodiest century of the past millennium—ethnic cleansing ranks among the worst. The term burst forth in public discourse in the spring of 1992 as a way to describe Serbian attacks on the Muslims of Bosnia-Herzegovina, but as this landmark book attests, ethnic cleansing is neither new nor likely to cease in our time.

Norman Naimark, distinguished historian of Europe and Russia, provides an insightful history of ethnic cleansing and its relationship to genocide and population transfer. Focusing on five specific cases, he exposes the myths about ethnic cleansing, in particular the commonly held belief that the practice stems from ancient hatreds. Naimark shows that this face of genocide had its roots in the European nationalism of the late nineteenth century but found its most virulent expression in the twentieth century as modern states and societies began to organize themselves by ethnic criteria. The most obvious example, and one of Naimark’s cases, is the Nazi attack on the Jews that culminated in the Holocaust. Naimark also discusses the Armenian genocide of 1915 and the expulsion of Greeks from Anatolia during the Greco–Turkish War of 1921–22; the Soviet forced deportation of the Chechens-Ingush and the Crimean Tatars in 1944; the Polish and Czechoslovak expulsion of the Germans in 1944–47; and Bosnia and Kosovo.

In this harrowing history, Naimark reveals how over and over, as racism and religious hatreds picked up an ethnic name tag, war provided a cover for violence and mayhem, an evil tapestry behind which nations acted with impunity.

REVIEWS
As Norman M. Naimark observes…with broad enough standards the ‘ethnic cleansing’ label can be affixed to events as disparate as the destruction of Carthage, the crusade against the Albigensians, the expulsion of Jews from Spain, the Spanish conquest of the Incas and Aztecs, and the expulsion of Indians from tribal lands in the United States… He objects that such a catchall approach fails to explain current events in useful terms… Naimark provides…disturbing details—and much other cause for sad reflection.
-- Anatole Shub New Leader


What strands link the last century’s bloody spasms of ethnic cleansing—from the Armenian genocide and the Holocaust to Bosnia and Kosovo? Stanford University historian Naimark argues ethnic cleansing is a profoundly twentieth-century phenomenon, not a product of ‘ancient hatreds’… The ugliness of ethnic cleansing—its violence and brutality, its misogyny and totality, its effort to eradicate every trace of ‘the other’—poses unique challenges to an international community reluctant to intervene in the internal affairs of a sovereign nation state.
-- Mary Carroll Booklist


A needed measure of clarity… [Naimark] embeds ethnic cleansing in the history of 20th-century Europe…[and] undercuts the standard wisdom that holds ancient enmities responsible for atrocities perpetrated in the modern era… Students of history and international relations are indebted to professor Naimark for [his] sobering insights.
-- James R. Holmes Library Journal


As a contribution to the study of mass violence in this century, this book is very reliable, eminently readable, and highly educational. Naimark emphasizes that ethnic cleansing is a ‘profoundly modern experience’ and the international community, which has sometimes encouraged and more usually ignored large-scale atrocities, is responsible.
-- Stanley Hoffmann, Harvard University


During the last decade, Americans and Europeans rediscovered the horrors of ethnic cleansing in Bosnia, Croatia, and Kosovo. Norman Naimark’s important research demonstrates that it was hardly an invention of the l990s, but has had a long history, often shrouded in silence because it was easier to live with the results. This is an immensely relevant and anguishing study.
-- Charles Maier, Harvard University