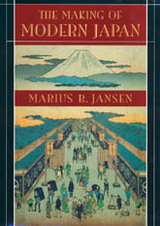 Magisterial in vision, sweeping in scope, this monumental work presents a seamless account of Japanese society during the modern era, from 1600 to the present. A distillation of more than fifty years’ engagement with Japan and its history, it is the crowning work of our leading interpreter of the modern Japanese experience.

Since 1600 Japan has undergone three periods of wrenching social and institutional change, following the imposition of hegemonic order on feudal society by the Tokugawa shogun; the opening of Japan’s ports by Commodore Perry; and defeat in World War II. The Making of Modern Japan charts these changes: the social engineering begun with the founding of the shogunate in 1600, the emergence of village and castle towns with consumer populations, and the diffusion of samurai values in the culture.

Marius Jansen covers the making of the modern state, the adaptation of Western models, growing international trade, the broadening opportunity in Japanese society with industrialization, and the postwar occupation reforms imposed by General MacArthur. Throughout, the book gives voice to the individuals and views that have shaped the actions and beliefs of the Japanese, with writers, artists, and thinkers, as well as political leaders given their due.

The story this book tells, though marked by profound changes, is also one of remarkable consistency, in which continuities outweigh upheavals in the development of society, and successive waves of outside influence have only served to strengthen a sense of what is unique and native to Japanese experience. The Making of Modern Japan takes us to the core of this experience as it illuminates one of the contemporary world’s most compelling transformations.

REVIEWS
An elegant, lucid, and magisterial book. A distillation of more than fifty years' engagement with Japan and its history, it presents the sweeping vision of our leading interpreter of the modern Japanese experience over the past half-millennium. Marius Jansen has integrated his own scholarship and that of many others in a lively account that has great potential as a text for survey courses in modern Japanese history; professionals in the field will benefit from its integrity and interpretive breadth. Moreover, Jansen's own enthusiasm and love for his subject come through every bit as clearly as his profound erudition; that sense of excitement carries the reader along smoothly and effortlessly. The book is a pleasure to read.
-- Ronald P. Toby, University of Illinois


A tremendous history of the upheavals that transformed Japan into the world's most successful of non-Western countries. Jansen shows how the country at first reluctantly, and then enthusiastically, benefited from the changes of the modern era...Jansen weaves social and political history together while narrating this course of events...A master work that will prove to be the definitive history of a dynamic society.
-- Kirkus Reviews


Jansen conducts his readers through the labyrinthine path taken by Japan over the last 400 years...For Westerners the most fascinating aspect of this monumental work will be Japan's always uneasy, sometimes violent relationship with the outside world...Besides politics, he ventures into economics, military affairs, literature, education, social organization and both high and popular culture.
-- Publishers Weekly


Words that spring to mind are magisterial, elegant, absorbing, and essential...Political military narrative is complemented by sketches of personalities, the arts, and society, with judicious assessments of controversies in historical interpretation and generous references to further reading. All in all, it would be hard to find a better general volume.
-- Charles W. Hayford Library Journal


Despite our deep national involvement with the Japanese people since the end of World War II, this still frustratingly insular nation remains a puzzle for Americans and other westerners...[Jansen] strives valiantly to explain the foundations of modern Japanese history and culture in this richly detailed, smooth-flowing narrative of the past four centuries of Japanese development...A greatly rewarding examination of an admirable but enigmatic and ancient land."
-- Jay Freeman Booklist


Jansen's view of modern Japanese history has two particular merits. He refuses to see Japan in isolation, as a kind of sealed-off island of uniqueness...Indeed, he argues that political developments in Japan were almost always responses to events outside: Perry's ships, Western colonialism, Russian and later Soviet expansion, the world stock market crash of 1929 and so on. He also goes out of his way to show how liberalism in Japan always had a chance. Authoritarianism and war were never inevitable consequences of some deep Japanese warrior instinct; when given the opportunity, the Japanese, like the rest of us, want to be free and live in peace.
-- Ian Buruman Los Angeles Times Book Review


Now in a magisterial book that's also highly readable, Marius Jansen has told the story of Meiji and with it the creation of modern Japan...Jansen takes the reader by the hand to show what happened and why in those intense, formative years. A master of his craft, he allows the Meiji reformers, their opponents and foreign observers of that day to tell the story. He also gives credit to the views of contemporary historians, both Japanese and Westerners, who have handled the subject...The capstone of Jansen's work as America's foremost historian of Japan, this book will long be must reading for students. But the author's relaxed style, his eye for people and the clarity and patience of his explanations should appeal to any thoughtful reader.
-- Frank Gibney Washington Post Book World


For answers to...questions about modern Japan, there can be few better guides than Marius Jansen's splendid new history. The product of more than 50 years' study, this book combines grand sweep with vivid and telling anecdote. It is also admirably balanced. While Jansen's affection for Japan is clear ('a gifted, resourceful and courageous nation'), he is scathing in his judgement of the arrogance and ruthlessness of some of its leaders.
-- Geoffrey Owen Sunday Telegraph


At the end of a long and distinguished career, Jansen has produced what is sure to become the standard narrative history of modern Japan, a cornucopia of information, explanation, interpretation, and careful reflection about the historical development of Japan...Jansen tells his story gracefully and with remarkable thoroughness, and enlivens it with ample detail and engaging anecdotes; personalities of the leading figures stand forth boldly and memorably. While unmistakably his own, Jansen's account makes room for the views and voices of countless other scholars of Japan (even those with whom he disagrees), giving it the impact of a consensus narrative setting forth the full spectrum of opinion on Japan among scholars both in Japan and elsewhere. In every way this is a remarkable book. Without doubt it will create its own exclusive niche in the literature, and no reference collection on Japan can pretend to be complete without it.
-- C. L. Yates Choice


Jansen gives equal weight to consistency and change, and against a background of deep tradition he focuses on three moments of wrenching upheaval: the Tokugawa shogunate, the Meiji restoration, and the American occupation after the second world war...Jansen provides a sense of significant voices--those of writers as well as politicians and industrialists. It's hard to imagine a more wide-sweeping study.
-- Jan Dalley Financial Times


This definitive historical companion is clear, simple and thorough, from what was decided at the battle of Sekigahara in 1600--life for the next 253 years, more or less--to the grey demographics and economics of now.
-- Vera Rule The Guardian (UK)


This magisterial work has all the details one would want in a reference work, but the mature reflections of a lifelong Japan scholar at Princeton make it a pleasure to readAt every turn, Jansen looks behind the political stage to examine cultural and social developments. He avoids abstract theorizing by recounting the experiences of specific Japanese individuals, giving the story a strong human dimension.
-- Foreign Affairs