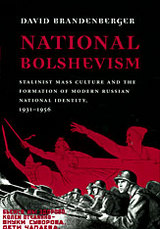 National Bolshevism: Stalinist Mass Culture and the Formation of Modern Russian National Identity, 1931–1956
by David Brandenberger
Harvard University Press, 2002
Cloth: 978-0-674-00906-6
During the 1930s, Stalin and his entourage rehabilitated famous names from the Russian national past in a propaganda campaign designed to mobilize Soviet society for the coming war. Legendary heroes like Aleksandr Nevskii and epic events like the Battle of Borodino quickly eclipsed more conventional communist slogans revolving around class struggle and proletarian internationalism. In a provocative study, David Brandenberger traces this populist "national Bolshevism" into the 1950s, highlighting the catalytic effect that it had on Russian national identity formation.

Beginning with national Bolshevism's origins within Stalin's inner circle, Brandenberger next examines its projection into Soviet society through education and mass culture--from textbooks and belletristic literature to theater, opera, film, and the arts. Brandenberger then turns to the popular reception of this propaganda, uncovering glimpses of Stalin-era public opinion in letters, diaries, and secret police reports.

Controversial insofar as Soviet social identity is commonly associated with propaganda promoting class consciousness, this study argues that Stalinist ideology was actually more Russian nationalist than it was proletarian internationalist. National Bolshevism helps to explain not only why this genre of populism survived Stalin's death in 1953, but why it continues to resonate among Russians today.

Part One: 1931-1941
2. Mobilizing Stalinist Society in the Early to Mid-1930s
3. The Emergence of Russocentric Etatism
4. Ideology in the Prewar Classroom
5. Popularizing State Ideology through Mass Culture
6. The Popular Reception of National Bolshevism on the Eve of War

Part Two: 1941-1945
7. Wartime Stalinist Ideology and Its Discontents
8. Ideological Education on the Home Front
9. Wartime Mass Culture and Propaganda
10. Popular Engagement with the Official Line during the War

A major contribution to the growing literature on Soviet nationality policy. David Brandenberger frames his study with a large and important question: the generation of a Russian/Soviet national identity during the Stalinist years. He tells the important story of the production of a more nationalist world view and how it was received, moving from elites to the masses. Focusing on history and historians, Brandenberger links historiography with nation-making and state building. This work should be widely read, not least because it clearly and eloquently illuminates the painful process of forging national identity.
--Ronald Grigor Suny, University of Chicago

Brandenberger alters our understanding of how Soviet culture was created and how it held Soviet society together. Perhaps the greatest strength of the book is the foundation of documents on which it rests. Clearly the result of years of gathering, these documents show us Stalinism as received, as a set of social practices and discourses in constant revision and misuse. National Bolshevism illuminates broader debates about the functioning of Soviet society, the origins of national consciousness, and the formation of the subject with the modern state, and will be a widely read contribution to the field.
--James von Geldern, Macalester College
TABLE OF CONTENTS