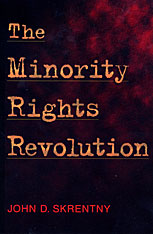 In the wake of the black civil rights movement, other disadvantaged groups of Americans began to make headway—Latinos, women, Asian Americans, and the disabled found themselves the beneficiaries of new laws and policies—and by the early 1970s a minority rights revolution was well underway. In the first book to take a broad perspective on this wide-ranging and far-reaching phenomenon, John D. Skrentny exposes the connections between the diverse actions and circumstances that contributed to this revolution—and that forever changed the face of American politics.

Though protest and lobbying played a role in bringing about new laws and regulations—touching everything from wheelchair access to women’s athletics to bilingual education—what Skrentny describes was not primarily a bottom-up story of radical confrontation. Rather, elites often led the way, and some of the most prominent advocates for expanding civil rights were the conservative Republicans who later emerged as these policies’ most vociferous opponents. This book traces the minority rights revolution back to its roots not only in the black civil rights movement but in the aftermath of World War II, in which a world consensus on equal rights emerged from the Allies’ triumph over the oppressive regimes of Nazi Germany and Imperial Japan, and then the Soviet Union. It also contrasts failed minority rights development for white ethnics and gays/lesbians with groups the government successfully categorized with African Americans. Investigating these links, Skrentny is able to present the world as America’s leaders saw it; and so, to show how and why familiar figures—such as Lyndon Johnson, Richard Nixon, and, remarkably enough, conservatives like Senator Barry Goldwater and Robert Bork—created and advanced policies that have made the country more egalitarian but left it perhaps as divided as ever.

REVIEWS
Writing mostly from a leftist perspective, Skrentny...presents the definitive account of the minority rights revolution of the 1960s and 1970s. Using research and archival materials, as well as interviews with policymakers, he scrutinizes a broad array of civil rights policies, federal legislation, and court decisions regarding African Americans, white ethnics, women, gays and lesbians, the disabled, American Indians, Hispanics, and Asian Americans...This compelling work contributes significantly to the debates on civil rights. For readers of all political persuasions.
-- Edward G. McCormack Library Journal


As John Skrentny carefully documents in The Minority Rights Revolution, the transformation of the legal and policy landscape that occurred between the mid-1960s and the mid-1970s came about with remarkably little public discussion. While for generations African-Americans fought for equality, after the 1964 Civil Rights Act other groups, including the ill-defined one labeled Hispanics, essentially piggy-backed on their efforts.
-- David L. Kirp The Nation


[Skrentny] offers a strong and well-supported argument about how a general, permanent change took place in the terms on which different kinds of people "belong" to the American polity...Skrentny's demonstration of how specific people brought about specific changes is...persuasive.
-- Edward Countryman Washington Post


The Minority Rights Revolution is a magisterial treatment of its subject. Skrentny's account of the emergence of the official minorities shows the importance of taken-for-granted social meanings-particularly with regard to race-as factors both enabling and constraining the making of public policy.
-- Glenn C. Loury, author of The Anatomy of Racial Inequality


This path-breaking book puts culture at the center stage of policy studies. Skrentny brilliantly shows that policies pertaining to women, gays and lesbians, the disabled, Hispanics, Asians, and white ethnics were determined by whether these groups were seen as analogous to blacks. The book provides undeniable evidence that shifts in symbolic boundaries between groups were crucial to the remaking of American society over the last forty years.
-- Michèle Lamont, Princeton University


The Minority Rights Revolution enriches our understanding of enduring puzzles about American democracy: why some weak groups succeed politically while strong ones fail; why politicians respond to certain kinds of pressures and not others; how historical context and contingency shape policy outcomes; and why minority rights and remedies take the forms that they do. Every social revolution needs its careful chronicler; this one is fortunate indeed to have Skrentny.
-- Peter H. Schuck, Yale Law School


John Skrentny has written the definitive account of the dramatic expansion of minority rights in America in the 1960s and 1970s. At the core of the book is a fundamental question: who should benefit from policies to remedy past discrimination and ensure equal opportunity? This book is must-reading for those concerned about the past and present of inequality, identity, and social policy in the United States.
-- Thomas J. Sugrue, University of Pennsylvania


Finally we have a full-length study of the explosive growth of the social regulation for minority 'rights' that characterized so much of U.S. politics in the latter part of the twentieth century. Skrentny skillfully combines cultural with institutional analysis to show how and why, for this limited period, Democrats and Republicans joined in a common crusade of policy making. His analysis is full of ironies and offers a fascinating window into our nation's politics.
-- Theda Skocpol, Harvard University


For The Minority Rights Revolution John Skrentny paid his devotions to the gods of the archive (presumably lares like Karl and Max), getting us inside the words of Washington decisionmakers from the triumph of the black civil rights movement in the early and mid-1960s to the collapse of the civil rights model in 1975. With African Americans providing the paradigm of an excluded minority, and a tactical tool kit of remedies, policymakers applied the new thinking to a number of other groups. Skrentny shows why some groups fit easily under the new model whereas others did not. It is a powerful and thought-provoking book...Skrentny's causal model relies heavily on the power of ideas themselves, or as he quotes Everett Dirksen, "No army is stronger than an idea whose time has come." Alas, ideas do not spread by themselves. They require armies, figurative if not literal, who believe in them or pursue other goals by spreading them...Sociologists' allergy to strategy is beginning to cripple us, and only a book as carefully detailed as Skrentny's will allow an interesting reality to peek through our own paradigms.
-- James M. Jasper Qualitative Sociology


This ambitious book provides a clearly written and detailed historical analysis of the evolution of civil rights law and policy in the post-World War II period.
-- Kevin Johnson American Journal of Legal History


Sociologists' allergy to strategy is beginning to cripple us, and only a book as carefully detailed as Skrentny's will allow an interesting reality to peek through our own paradigms.
-- James M. Jasper Qualitative Sociology