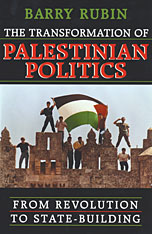 This book is a comprehensive overview and analysis of the Palestinians' travail as they move from revolutionary movement to state. Barry Rubin outlines the difficulties in the transition now under way arising from Palestinian history, society, and diplomatic agreements. He writes about the search for a national identity, the choice of an economic system, and the structure of government.

Rubin finds the political system interestingly distinctive--it appears to be a pluralist dictatorship. There are free elections, multiple parties, and some latitude in civil liberties. Yet there is a relatively unrestrained chief executive and arbitrariness in applying the law because of restraints on freedom. The new ruling elite is a complex mixture of veteran revolutionaries, heirs to large and wealthy families, professional soldiers, technocrats, and Islamic clerics.

Beyond explaining how the executive and legislative branches work, Rubin factors in the role of public opinion in the peace process, the place of nongovernmental institutions, opposition movements, and the Palestinian Authority's foreign relations--including Palestinian views and interactions with the Arab world, Israel, and the United States.

This book is drawn from documents in Arabic, Hebrew, and English, as well as interviews and direct observations. Rubin finds that, overall, the positive aspects of the Palestinian Authority outweigh the negative, and he foresees the establishment of a Palestinian state. His charting of the triumphs and difficulties of this state-in-the-making helps predict and explain future dramatic developments in the Middle East.

REVIEWS
Barry Rubin's timely Transformation of Palestinian Politics provides a superb and weighty account of the complexities of the Palestinian problem and the significant impediments to state-building...As deputy director of the Begin-Sadat Center for Strategic Studies, Rubin is well acquainted with Palestinian political life, having written several notable books on the subject. In his most recent effort, he carefully delineates the path of transition or pre-statehood for the current PA--complete will all its bumps and turns...Rubin covers in rich and penetrating detail the deleterious effects of the fledgling Palestinian Legislative Council (PLC) on the Arafat-led government-in-training, the rising expectations of a long-suffering and dispossessed people and the controversial issues of democratic development and respect for human rights.
-- Peter McKenna Washington Post Book World


Barry Rubin, deputy director of the Begin-Sadat Center for Strategic Studies at Bar-Ilan University, is a keen observer of the Middle East. The Transformation of Palestinain Politics is a cogent analysis of the challenges facing the Palestinian Authority today.
-- Sheldon Kirshner Canadian Jewish News


In this judicious and thoughtful book, Rubin describes the Palestinian's slow walk towards statehood, one riddled with contradictions and burdened by deep-seated historical animosities. Analyzing both the Palestinians' noticeable failures and surprising successes, Rubin offers a prognosis for the future with the measured optimism of someone who has watched the conflict unfold from up-close for some time.
-- Kate Cambor Boston Book Review


In his excellent The Transformation of Palestinian Politics, Rubin wants critics of Yassar Arafat and the Palestinian Authority to temper their disparaging comments with a hefty dose of reality: Specifically, he says, there will be no Palestinian state without a peace agreement with Israel and a solid institutional foundation...Rubin is well qualified to chronicle the path of transition or pre-statehood, with its unpredictable twists and turns. By specifically homing in on the transitional, or embryonic phase, Rubin seeks to situate legitimate criticisms of the 1993-95 Oslo Accords within the context of incredibly complex and difficult growing pains for an essentially interim government.
-- Peter McKenna Globe and Mail


Rubin is the first to take a detailed and systematic look at the issues--not surprising given that the subject did not exist before 1994--and therein lies the main contribution of the book. He provides an interesting overview of what will undoubtedly be a subject of continuing investigation over the years. The book should be of considerable interest to students of Middle Eastern, and especially Palestinian and Israeli-Palestinian politics. Rubin presents a balanced (even sympathetic) account of the challenges facing the Palestinian Authority, shows how relatively stable post-revolutionary institutions have already been built, and concludes with a sanguine view of the prospects for successful state-building in the future. The book is argued in a fairly persuasive fashion, the organization is logical, the scholarship is sound (no polemics or distortion of evidence), and the conclusions are judicious.
-- Mark A. Heller, Jaffee Center for Strategic Studies, Tel Aviv University


[A] fair treatment of the subject, the transformation of the PLO from a military-political organization to the force behind the establishment of a Palestinian state. Rubin is well informed, and the book is based on a wide selection of Arabic language sources, as well as Israeli and English language.
-- Walter Laqueur, Center for Strategic and International Studies, Washington


Excellent. Rubin has taken up a subject that is seemingly familiar (Palestinians feature almost daily in the news) but is in fact unknown (how the Palestinian Authority actually operates). There is nothing remotely comparable to this book in English. He writes about obscure but vital aspects of the Palestinian Authority with a sure hand. The greatest strength of the book lies in its providing new information in a clear context. Rubin's sources are excellent, his judgment reliable. The writing style is solid. The study significantly advances knowledge about its subject matter.
-- Daniel Pipes Middle East Quarterly


In this highly readable book, Rubin examines the prospect of Palestinian statehood...Drawing on an impressive array of English, Hebrew, and Arabic sources, the author explores a complicated maze of interaction between Yasser Arafat's Palestinian Authority and its internal opponents. Crucially, the book also places the Palestinian Authority's struggle in the context of Israeli and regional politics.
-- Nader Entessar Library Journal


Rubin...manages a balanced presentation of all the many different players in this ongoing Palestinian drama--Yasir Arafat, the PLO, Hamas, the many Israeli political groupings, the Arab states, the United States, and the international community. With nine detailed but succinct chapters, this book is an eminently readable achievement.
-- L. Carl Brown Foreign Affairs