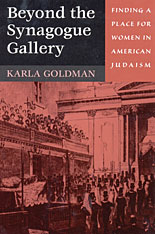 Beyond the Synagogue Gallery recounts the emergence of new roles for American Jewish women in public worship and synagogue life. Karla Goldman's study of changing patterns of female religiosity is a story of acculturation, of adjustments made to fit Jewish worship into American society.

Goldman focuses on the nineteenth century. This was an era in which immigrant communities strove for middle-class respectability for themselves and their religion, even while fearing a loss of traditions and identity. For acculturating Jews some practices, like the ritual bath, quickly disappeared. Women's traditional segregation from the service in screened women's galleries was gradually replaced by family pews and mixed choirs. By the end of the century, with the rising tide of Jewish immigration from Russia and Eastern Europe, the spread of women's social and religious activism within a network of organizations brought collective strength to the nation's established Jewish community. Throughout these changing times, though, Goldman notes persistent ambiguous feelings about the appropriate place of women in Judaism, even among reformers.

This account of the evolving religious identities of American Jewish women expands our understanding of women's religious roles and of the Americanization of Judaism in the nineteenth century; it makes an essential contribution to the history of religion in America.

REVIEWS
Most worshipers in American synagogues (outside the Orthodox) may not remember the absence of women in their sanctuaries, but this wasn’t always so… [Beyond the Synagogue Gallery] unfolds the history of the transformation in synagogue design and organization that shaped American Judaism.
-- Jack Fischel Indiana Jewish Post & Opinion


An important component of this interesting and well-written study is the author’s decision to place this narrative within the larger context of the nineteenth-century American Jewish women, but because Goldman widely utilizes the plethora of excellent scholarship that describes and analyzes the gendered lives and activities of Protestant women and white middle-class society, she places her narrative within the larger context of American religious life in the nineteenth century.
-- Carol K. Colburn American Jewish History


Karla Goldman’s scholarly and well-researched book Beyond the Synagogue Gallery…was such a pleasure to read that not only did I take prolific notes while reading it, I also found myself laughing aloud at some of the quirks of synagogue life revealed in her exploration of the role of women in American Jewry… Her study exposes every major transformation of the American synagogue as being bound up with major redefinitions of the place of women in public and private life. She demonstrates that the emergence of women as a dominant presence in public worship began to define both the synagogue and American Jewish public life.
-- Rabbi Sylvia Rothschild Jewish Chronicle


Goldman’s scholarly and well-researched book…[is] a pleasure to read…[she] focuses on how women found their place in American Judaism and the power they attained by their access to communal organizations. She is particularly eloquent on the reinvigorating effect of women upon dry and lifeless religious communities.
-- Jewish Chronicle


Weaving together anecdotes with choice quotes from letters and newspapers, Goldman presents a thorough yet accessible historical study of women’s growing participation in synagogue activities in the United States…[and] tells a triumphant story of Jewish women’s organizations in enabling women’s contributions.
-- Library Journal


A thorough survey of the innovations introduced into the American synagogue in the nineteenth century by the Reform movement, focusing on the Jewish woman’s gradual religious emancipation… An interesting and well-written study.
-- Kirkus Reviews