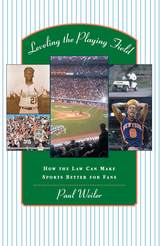 The world of sports seems entwined with lawsuits. This is so, Paul Weiler explains, because of two characteristics intrinsic to all competitive sports. First, sporting contests lose their drama if the competition becomes too lopsided. Second, the winning athletes and teams usually take the "lion's share" of both fan attention and spending. So interest in second-rate teams and in second-rate leagues rapidly wanes, leaving one dominant league with monopoly power.

The ideal of evenly balanced sporting contests is continually challenged by economic, social, and technological forces. Consequently, Weiler argues, the law is essential to level the playing field for players, owners, and ultimately fans and taxpayers. For example, he shows why players' use of performance-enhancing drugs, even legal ones, should be treated as a more serious offense than, say, use of cocaine. He also explains why proposals to break up dominant leagues and create new ones will not work, and thus why both union representation of players and legal protection for fans--and taxpayers--are necessary.

Using well-known incidents--and supplying little-known facts--Weiler analyzes a wide array of moral and economic issues that arise in all competitive sports. He tells us, for example, how Commissioner Bud Selig should respond to Pete Rose's quest for admission to the Hall of Fame; what kind of settlement will allow baseball players and owners to avoid a replay of their past labor battles; and how our political leaders should address the recent wave of taxpayer-built stadiums.

REVIEWS
Paul Weiler has always been a name and an opinion you can trust in the sports industry. His advice is sought out by all. He has created a standard that will be hard to duplicate.
-- Gene Upshaw, Executive Director of the NFL Players Association


An insightful and penetrating book about the problems of professional sports leagues in the United States...Although most of Leveling the Playing Field deals with economic and legal issues affecting pro sports...most interesting...are Weiler's ideas about how to balance the field, improve equitable treatment of athletes and avoid labor unrest...Leveling the Playing Field is a levelheaded, sophisticated and important look into what ails professional sports in the United States and what can be done about it.
-- Andrew Zimbalist Washington Post


[Leveling the Playing Field] may be the best work in the field...[It] offers an accessible, comprehensive analysis of the nature of the professional sports enterprise, and presents the author's vision for how it should be reordered. To my knowledge, no one has done this before. Rich and provocative...[Weiler's] book is chock-full of inventive, provocative, even audacious, proposals for reforming the four major professional team sports [baseball, basketball, football and hockey]...This is a book that cannot be ignored. Leveling the Playing Field likely will become the starting point for any discussion of the state of the North American sports enterprise at the turn of the new century.
-- Roger I. Abrams Jurist: Books-on-Law


This provocative book combines the broad knowledge of an all-seasons sports fan with the clarity of an anti-trust lawyer. Weiler...approaches major league sports as a special study in cartel theory...[He] writes lucidly and persuasively; rarely has the surface of professional sports been so revealingly pared away.
-- Allen D. Boyer New York Times Book Review


Making sense of the business of professional sports demands advanced degrees in law and commerce. Who but the experts can fathom the complexities of hard and soft salary caps, Group Two free agencies, revenue-sharing and the intricacies of collective-bargaining agreements? Happily, Paul Weiler has arrived to answer the literate...fan's many questions while providing a road map for players, owners, and governments about how to put professional sports on a better financial footing while retaining fan loyalty...Weiler has delivered a wonderfully balanced, nuanced, and richly detailed look at professional sports.
-- Jeffrey Simpson Globe and Mail


Paul Weiler has been at the forefront for a long time as an expert in sports and labor. He has been consulted in many of the cases that helped shape the way sports changed in the 70s and 80s on the way to the collective bargaining agreements that all leagues are now working with. He has a better grasp of this subject than anyone I know. When it comes to sports law, Paul Weiler knows the answer before you ask the question.
-- Will McDonough Boston Globe


Leveling the Playing Field is likely to become a starting point for any discussion of the American sports enterprise. It is a history book, filled with storytelling and inside sports gossip of interest to the fans, with some very telling conclusions bound to create a fair amount of controversy. Weiler approaches the sports enterprise with confidence, leaving nothing sacred and untouchable.
-- Roger I. Abrams, Dean, Northeastern University School of Law, author of Legal Bases: Baseball and the Law


The idea that the American legal system can improve something for the public benefit is indeed novel, and many potential readers may be intrigued by such an unusual, first-time-for-everything prospectThe discussion finally reveals major league sport for what it really is: a vast funneling operation by which public money is transferred into the pockets of a few playing partners.
-- John Barnes ISUMA

TABLE OF CONTENTS
Contents
Prologue: Sports on Trial
I The Integrity of Sports
1 Misconduct on the Field
2 Honoring Civil Rights in Sports
3 The Deadliest Sin in Sports
4 The Sports War on Drugs
5 Athletes as Role Models
6 The Moral Ideal for American Sports
II Owners versus Players
7 Show Us the Money
8 Sports Joins the Union
9 Opening the Flood-Gates
10 What Antitrust Did for Players
11 How to Level the Player Field
12 Salary Sharing among Players
III Owners versus Owners -- and Fans
13 The Brave New World of Franchise Free Agency
14 How Far Have We Traveled?
15 What the Law Should Do with Raiders
16 Stadium Socialism or a Stadium Cap?
17 Sports in Intellectual Space
18 What Should Leagues Be Like?
19 Expand or Break up the Big Leagues?
20 A Better World for Fans
Epilogue. A Performance-Enhancing Law for Sports
Acknowledgements
Index