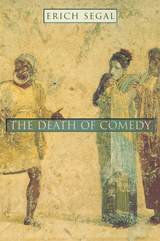 In a grand tour of comic theater over the centuries, Erich Segal traces the evolution of the classical form from its early origins in a misogynistic quip by the sixth-century B.C. Susarion, through countless weddings and happy endings, to the exasperated monosyllables of Samuel Beckett. With fitting wit, profound erudition lightly worn, and instructive examples from the mildly amusing to the uproarious, his book fully illustrates comedy's glorious life cycle from its first breath to its death in the Theater of the Absurd.

An exploration of various landmarks in the history of a genre that flourished almost unchanged for two millennia, The Death of Comedy revisits the obscenities and raucous twists of Aristophanes, the neighborly pleasantries of Menander, the tomfoolery and farce of Plautus. Segal shows how the ribaldry of foiled adultery, a staple of Roman comedy, reappears in force on the stages of Restoration England. And he gives us a closer look at the schadenfreude--delight in someone else's misfortune--that marks Machiavelli's and Marlowe's works.

At every turn in Segal's analysis--from Shakespeare to Molière to Shaw--another facet of the comic art emerges, until finally, he argues, "the head conquers and the heart dies": Letting the intellect take the lead, Cocteau, Ionesco, and Beckett smother comedy as we know it. The book is a tour de force, a sweeping panorama of the art and history of comedy, as insightful as it is delightful to read.

REVIEWS
Its sweep of knowledge, learning unostentatiously presented, and its atmosphere of unsentimental engagement make The Death of Comedy broad and enlightening. Eminently readable, with flashes of wit and spice, it is the work of a distinguished scholar and creative writer.
-- Eric Handley, Trinity College Cambridge University


Erich Segal's introduction to ancient comedy in this book will both interest and delight many readers.
-- Hugh Lloyd-Jones


Erich Segal's discussion of Shakespeare's comic genius is richly informed by his deep knowledge of the classical comedy which influenced Shakespeare. Segal's brio is all but Shakespearean in its laughing intensity.
-- Harold Bloom


Explaining and analyzing comedy is a thankless task; humor either flies or it falls, and most theatergoers do not require a more experienced hand to guide them in their responses. Given these exigencies, Segal's interpretive achievements soar in a work both accessible and informative. Offering a sweeping tour of comic theater from the Greeks to Beckett, he argues wistfully that the dour Irishman killed off the swell old stuff of life and laughter, in which plots ended right where they should in the joys of marriage and home. The lay reader...will find much to enjoy in a genial perusal of western civilization's funniest theatrical moments. Then ample quotations provide a gut-busting overview of theater at its hilarious best. If only every writer so smart were so engaging.
-- Kirkus Reviews


[Erich Segal's] new study of comedy in the Western theater displays the strengths he has built in both the arenas in which he competes. His scholarship is impressive: he manages to discuss in detail works by every major comic writer from Aristophanes andPlautus to Ionesco and Beckett. He is especially good on the Greek and Roman comic playwrights, and he spends at least half the book on those influential but, to the modern reader, lesser-known writers. Flexing his pop novelist's muscles, Segal conveys his ideas in clean, graceful, witty, and above all, highly accessible prose. You don't need a Ph.D. from Harvard tounderstand him, and you don't need to fully accept his thesis that traditional comedy 'died' or perhaps was killed by the modernist writers to enjoy and be enlightened by this lively book.
-- Jack Helbig Booklist


This academic monograph is readable, erudite, and witty.Segal is a wonderful companion with whom to read these plays. Enthusiastically recommended.
-- Thomas E. Luddy Library Journal


[Segal's] hearty, sprawling book...puts all his skills as a popular novelist, screenwriter and professor of classics to work on surveying the evolution of comic drama in the West. From the ancient Greek countryside to the theater of the absurd, it's a story of general decline punctuated by brilliance, and it ends with a startling obituary. Comedy is dead, Segal says, weakened as early as Aristophanes and finally murdered in modernity by the likes of George Bernard Shaw, Eugène Ionesco and Samuel Beckett...He's generous with information about theaters and stagecraft, and his original translations capture the human appetite for carnival so dynamically they practically pop off the stage.
-- Joy Connolly New York Times Book Review


The Death of Comedy is not...a dry treatise on things you should read, whether you think they are funny or not. Throughout, it is punctuated with astute comparisons to contemporary situations and with wonderfully earthy translations, in particular of Aristophanes. Segal renders the Greek so frankly that, perhaps for the first time, readers will see why they should have laughed at Aristophanes when they were forced to read him in that archly fussy translation dated 1901.
-- Jonathan S. Perry Washington Post


Erich Segal's survey of comedies from A to B (that is, from Aristophanes to Samuel Beckett) is a comic parallel to George Steiner's The Death of Tragedy, an equally virtuosic and wide-ranging study...Like Steiner, Segal writes with such enthusiastic brilliance that I am left rushing off to read plays I have never quite got round to reading and to reread dozens of others I thought I knew, to discover, in the light of what he says. I hardly knew them.
-- Peter Holland Jewish Chronicle


The book is engagingly written and spiced with clever translations and observations; Segal enjoys the theater and has read widely...[T]he book offers detailed plot summaries that will serve the general reader as an entertaining guide to the treasures and pleasures of a great tradition. Unusual in surveying the genre of comedy on so broad a canvas, the book is recommended for readers at all levels.
-- D. Konstan Choice


Simply as history of the genre, [The Death of Comedy's] unique importance is its centering of the story in antiquity rather than after, and its convincing demonstration that the longer history of comedy is a series of responses to a poetics of comic drama, the lines of which were determined in the ancient world...[T]he writing fizzes, the translations are uniformly wonderful and the deep foundations of learning on which the whole project is built are discreetly cupboarded away in a hundred or so pages of endnotes. It is, in more than one sense, a personal history, the record of a lifelong project of investigation into how the popular can be serious, the classicist an entertainer--and in both cases and more importantly still, vice versa.
-- Nick Lowe Times Literary Supplement


Segal's fluent and appealing style is again evident in The Death of Comedy...Segal's style of writing is lively and entertaining. He wears his erudition lightly but the solid substratum of the wealth of references to sources ancient and modern is contained in the endnotes...[The Death of Comedy] provides a valuable and sprightly introduction to and overview of the subject.
-- Betine van Zyl Smit Scholia Reviews


This is a very grand survey of theatrical comedy from genesis to alleged nemesis, that is, from Aristophanes to Samuel Beckett. It is a huge, witty, learned and frequently engaging global tour of the genre, with numerous wise, or wise-ish, stopovers at most of the major comic sites between origin and suggested meltdown.
-- Valentine Cunningham Times Higher Education Supplement


Segal tells a cracking good story, a wondrous tale of comedy's life from its birth in the night of chaos B.A. (Before Aristophanes) to its recent death...Enjoyable and thought-provoking.
-- Alison Sharrock Journal of Hellenic Studies


Erich Segal's book The Death of Comedy is without a doubt the most comprehensive treatise to have been published for many a year about this marvelous genre.
-- Yitzhak Laor Haaretz

TABLE OF CONTENTS
Contents
Preface
1. Etymologies: Getting to the Root of It
2. The Song of the Komos
3. The Lyre and the Phallus
4. Aristophanes: The One and Only?
5. Failure and Success
6. The Birds: The Uncensored Fantasy
7. Requiem for a Genre?
8. The Comic Catastrophe
9. O Menander! O Life!
10. Plautus Makes an Entrance
11. A Plautine Problem Play
12. Terence: The African Connection
13. The Mother-in-Law of Modern Comedy
14. Machiavelli: The Comedy of Evil
15. Marlowe: Schade and Freude
16. Shakespeare: Errors and Eros
17. Twelfth Night: Dark Clouds over Illyria
18. Molière: The Class of ’68
19. The Fox, the Fops, and the Factotum
20. Comedy Explodes
21. Beckett: The Death of Comedy
Coda
Notes
Index