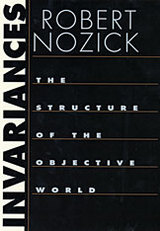 Recent scientific advances have placed many traditional philosophical concepts under great stress. In this pathbreaking book, the eminent philosopher Robert Nozick rethinks and transforms the concepts of truth, objectivity, necessity, contingency, consciousness, and ethics. Using an original method, he presents bold new philosophical theories that take account of scientific advances in physics, evolutionary biology, economics, and cognitive neuroscience, and casts current cultural controversies (such as whether all truth is relative and whether ethics is objective) in a wholly new light. Throughout, the book is open to, and engages in, the bold exploration of new philosophical possibilities.

Philosophy will never look the same. Truth is embedded in space-time and is relative to it. However, truth is not socially relative among human beings (extraterrestrials are another matter). Objective facts are invariant under specified transformations; objective beliefs are arrived at by a process in which biasing factors do not play a significant role. Necessity's domain is contracted (there are no important metaphysical necessities; water is not necessarily H2O) while the important and useful notion of degrees of contingency is elaborated. Gradations of consciousness (based upon "common registering") yield increasing capacity to fit actions to the world. The originating function of ethics is cooperation to mutual benefit, and evolution has instilled within humans a "normative module": the capacities to learn, internalize, follow norms, and make evaluations. Ethics has normative force because of the connection between ethics and conscious self-awareness. Nozick brings together the book's novel theories to show the extent to which there are objective ethical truths.

REVIEWS
An ambitious, stimulating effort to revitalize the notions of truth and objectivity in a way that takes account of contemporary physics and biology, Nozick's latest book lays out an agenda at once bold and tentative: to propose 'new and philosophically interesting' theses, but to aim only atexploration, not at conclusive proof. The Harvard professor's style is accessible; his approach is refreshingly nondogmatic.
-- Publishers Weekly


Nozick's new book...takes him away from politics and back to philosophy, his core field. In essence, he argues that the momentum of Western philosophy has been brought up short, not to say killed in its tracks, by advances in the hard and soft sciences, with ramifications he delineates carefully.
-- George Fetherling Vancouver Sun


Though written in his usual clear style, [Invariances] is in many ways a daunting book. It is rich in detail and breathtaking in sweep. But it is not, as Mr. Nozick himself warns us, systematic. Based on his John Locke lectures at Oxford University in 1997 and on other lectures elsewhere, its five parts explore relativism and truth, objectivity, necessity, consciousness and ethics...Philosophy begins in wonder, [Nozick] writes at the end, with a silent nod to A.N. Whitehead. Indeed, Mr. Nozick had a Romantic streak, both in his Utopian vision of society and in his conduct of philosophy. But this Byronic restlessness was the fault of his virtues: rare fluency and audacity--a fearless readiness to follow an idea where it led. Like any endeavor, philosophy needs explorers as well as mapmakers. As Mr. Nozick liked to say, there is room for words that are not last words.
-- The Economist


Drawing on contemporary work in physics, evolutionary biology, neuroscience, economic and political theory, as well as an extremely wide range of philosophical sources, Nozick takes up issues about truth, about the objectivity of science, about the metaphysics of necessity, about consciousness, and, finally, about the status of ethics. Again and again, he will begin with a problem, suggest a line of approach to it, and then follow that line in imaginative and often unanticipated ways until he has outlined the new possibilities he promised. The discussion is often dazzling and provocativeThe ideasare expressed with Nozick's characteristic clarity and panache[Invariances is] remarkable for its imagination and philosophical zest. We are fortunate to have so many rich and brilliant discussions of central philosophical issues.
-- Philip Kitcher Ethics


It is a philosophical book in the truest sense of the word[Robert Nozick] capitalizes on his impressive knowledge of twentieth-century developments in epistemology, in methodology and philosophy of science, and in science itself. And he confronts the uncertainties those developments have led us into head on without in the least being sentimental about it. This is not a book about chess, this is chess itself, drawing on the immense reservoir of games played and documented during the last hundred yearsThis book and each paragraph in it is the strongest antidote to the current spread of slides-thinking I have been confronted with in years. Which does not imply that I have gained much knowledge or wisdom by reading it. That is because even the illustrations and factual evidence presuppose too intimate an acquaintance with the scientific context and because it is not offering wisdom -- it is offering an exercise in working with wisdom, which is something else entirely. Philosophy begins in wonder, according to Aristotle.
-- Jos Leys Ethical Perspectives