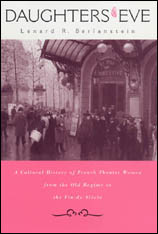 Drawing upon newspaper accounts, society columns, theater criticism, government reports, autobiographies, public rituals, and a huge corpus of fiction, Lenard Berlanstein argues that the public image of actresses was shaped by the political climate and ruling ideology; thus they were deified in one era and damned in the next. Tolerated when civil society functioned and demonized when it faltered, they finally passed from notoriety to celebrity with the stabilization of parliamentary life after 1880. Only then could female fans admire them openly, and could the state officially recognize their contributions to national life.

Daughters of Eve is a provocative look at how a culture creates social perceptions and reshuffles collective identities in response to political change.

REVIEWS
Students of French literature and culture will welcome this study of female performers, women who historically achieved great prominence because of their sexuality and public presence. Yet this is much more than simply a descriptive history. Berlanstein...puts theater women into the context of the evolving French debate over the role of women in the public sphere...This fascinating new work is an important addition to the scholarship on French gender history. Recommended for specialists in French history and culture.
-- Library Journal


Berlanstein's innovative and deeply engaging study reveals the surprising ways in which French theatrical women are good for thinking about power, politics, and gender in modern French history. It is a delightful bonus that a book which so insightfully problematizes our understanding of the history of gender in French society is so much fun to read.
-- Robert A. Nye, Author Of Masculinity and Male Codes of Honor in Modern France


Berlanstein introduces readers to some of the most famous and fascinating women in French history, while offering a provocative thesis about the meaning of their very public lives. From the age of Mademoiselle Clairon in the eighteenth century to that of Madame Bernhardt in the early twentieth, commentators projected onto the celebrated actresses all of the tensions of a rapidly changing society. This book offers, along with an abundance of vivid detail, a model of how historians can combine gender history with the social history of women.
-- Sarah Maza, Northwestern University


Berlanstein's book is a wonderful and lively evocation of Paris theater life across two centuries. But more than that, it tracks how the French public imagined and dealt with powerful women. A rich array of issues is dealt with along the way: the professionalization of acting, the rise of celebrity culture, and, not least of all, women's sell-fashioning in a public realm not of their making.
-- Philip J. Nord, Princeton University


Berlanstein makes a fundamental contribution to gender studies, while also offering original perspectives on nineteenth-century French political culture and the contested position of 'exceptional women' within it. He demonstrates in a particularly compelling way the potential in gender studies for reinterpreting relationships of power in public life. This is a major work.
-- Jo Burr Marcadant, Editor Of The New Biography: Perforating Femininity in Nineteenth--Century France