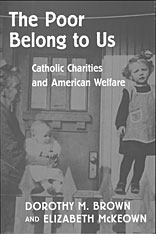 Between the Civil War and World War II, Catholic charities evolved from volunteer and local origins into a centralized and professionally trained workforce that played a prominent role in the development of American welfare. Dorothy Brown and Elizabeth McKeown document the extraordinary efforts of Catholic volunteers to care for Catholic families and resist Protestant and state intrusions at the local level, and they show how these initiatives provided the foundation for the development of the largest private system of social provision in the United States.

It is a story tightly interwoven with local, national, and religious politics that began with the steady influx of poor Catholic immigrants into urban centers. Supported by lay organizations and by sympathetic supporters in city and state politics, religious women operated foundling homes, orphanages, protectories, reformatories, and foster care programs for the children of the Catholic poor in New York City and in urban centers around the country.

When pressure from reform campaigns challenged Catholic child care practices in the first decades of the twentieth century, Catholic charities underwent a significant transformation, coming under central diocesan control and growing increasingly reliant on the services of professional social workers. And as the Depression brought nationwide poverty and an overwhelming need for public solutions, Catholic charities faced a staggering challenge to their traditional claim to stewardship of the poor. In their compelling account, Brown and McKeown add an important dimension to our understanding of the transition from private to state social welfare.

REVIEWS
[The Poor Belong to Us] raise[s] important questions about American social welfare history. [It] is particularly significant in that it restores Catholic charity to its rightful place at the center of that history. As the authors point out, Catholics represented the majority of dependent and delinquent children in most American cities for much of the nineteenth and twentieth centuries. Their book convincingly demonstrates that Catholic charities' massive efforts to aid their own needy had long-term ramifications for the entire modern American system of welfare provision...The book is an impressive achievement and should be required reading for all social welfare historians.
-- Susan L. Porter Journal of American History


Brown and McKeown provide a richly documented narrative that incorporates the insights and scholarship of American Catholic history and social history...The Poor Belong to Us represents an ambitious foray into territory within the history of Catholic social activism that has been neglected for too long. It provides an important counterpoise and supplement to the burgeoning scholarship on individual congregations of women religious and the Catholic Worker movement, two area adjacent to this study that have received considerable attention in the past three decades...In The Poor Belong to Us, readers gain a new understanding of the complexities and internal tensions within the world of Catholic social welfare during the century of growth and change chronicled by Brown and McKeown...They show us how, for most American Catholics of the nineteenth and early twentieth centuries, questions of class and social and economic responsibility can only be understood with reference to the faith, a pervasive yet elusive presence that Brown and McKeown illuminate for us in carefully pruned, contextualized examples from archival sources.
-- Debra Campbell Church History


This book documents the role of Catholics in the development of American welfare and shows strong parallels between situations and attitudes prevalent in the 19th century and those common today...Following the enactment of the 1996 welfare reform law, some of these same questions are being raised afresh today...That situation makes Brown and McKeown's historical account timely and relevant...Brown and McKeown neither try to sugarcoat nor to dramatize the role of Catholic charities in American welfare. The story is interesting enough in itself...This is an excellent work...For anyone wanting to better understand the role of Catholic charities in the American welfare system or even the development of charities and welfare in general, it is invaluable.
-- Diana Etindi Indianapolis Star


Thoroughly researched and meticulous in its reasoning...[this book] shows how Catholic charities helped poor people in America between the 1870s and 1930s...[It] remind[s] us how 'Catholic' poverty seemed for half a century, and how effectively a generation of more prosperous Catholics reacted to it. It also shows how the idea of caring for the poor, for centuries a religious duty, was rapidly secularized in America...The Poor Belong to Us takes its place as a study and reference work of permanent value.
-- Patrick Allitt Books and Culture


An interesting history of Catholic charitable institutions in the 20th century. The Poor Belong to Us traces the development of Catholic charities from a collection of ill-funded volunteer organizations in the 19th century into the largest private provider of social services in the country. Crisp writing and a keen eye for relevant detail carries the story along nicely...The authors display a deft hand in assembling their material, and impress the reader with their grasp of the large picture as well as the detail. This is a highly readable account of an important element of the history of the Church in America.
-- Robert Kennedy National Catholic Register


This institutional history is valuable for underscoring the importance of the private sector in American welfare and for adding a Catholic dimension to recent welfare scholarship.
-- S.L. Piott Choice


Historian Dorothy Brown and theologian Elizabeth McKeown analyze the evolution of Catholic Churches between the Civil War and World War II from its local volunteer origins to a centralized and professionalized workforce that played a prominent role in the development of the American welfare system that is now under attack. In this fascinating contribution to contemporary welfare scholarship, the authors' study is grounded in concerns and care for the children of the poor.
-- Dorothy Van Soest Journal of Sociology and Social Welfare