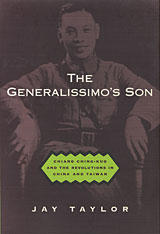 Chiang Ching-kuo, son and political heir of Generalissimo Chiang Kai-shek, was born in 1910, when Chinese women, nearly all illiterate, hobbled about on bound feet and men wore pigtails as symbols of subservience to the Manchu Dynasty. In his youth Ching-kuo was a Communist and a Trotskyite, and he lived twelve years in Russia. He died in 1988 as the leader of Taiwan, a Chinese society with a flourishing consumer economy and a budding but already wild, woolly, and open democracy. He was an actor in many of the events of the last century that shaped the history of China's struggles and achievements in the modern era: the surge of nationalism among Chinese youth, the grand appeal of Marxism-Leninism, the terrible battle against fascist Japan, and the long, destructive civil war between the Nationalists and the Communists. In 1949, he fled to Taiwan with his father and two million Nationalists. He led the brutal suppression of dissent on the island and was a major player in the cold, sometimes hot war between Communist China and America. By reacting to changing economic, social, and political dynamics on Taiwan, Sino-American rapprochement, Deng Xiaoping's sweeping reforms on the mainland, and other international events, he led Taiwan on a zigzag but ultimately successful transition from dictatorship to democracy.

Jay Taylor underscores the interaction of political developments on the mainland and in Taiwan and concludes that if China ever makes a similar transition, it will owe much to the Taiwan example and the Generalissimo's son.

REVIEWS
A breakthrough in information available in English about an important and relatively little-known historical character, about U.S.-Taiwan relations from the 1950s through the 1980s, and about political dictatorship and reform in Taiwan.
-- Andrew J. Nathan, author of China's Transition


A well-written account of an extraordinary life, narrated against the background of the world-shaking events in which Chiang Ching-kuo was deeply involved: the Soviet Revolution, the Sino-Japanese war, the civil war between the Nationalists and the Communists in China, and the Cold War. Taylor's book fills a glaring gap in the literature; it will be valued by scholars and by others interested in the character and role of a memorable individual in the making of today's Taiwan. In writing this full-length biography, Taylor has interviewed scores of people who knew Ching-kuo well at various stages of his life. He traveled to his hometown, Hsikou, and to the area that he administered in southern Kiangsi to interview people in both places about Ching-kuo's early life. He has also located documents and interviewed individuals who cast light on Ching-kuo's experience in the Soviet Union. It will be a distinguished addition to Harvard's publications on China.
-- Ralph N. Clough, Johns Hopkins University


A readable, and fascinating book--a breakthrough in information available in English about an important and relatively little-known historical character, about U. S.-Taiwan relations from the 1950s through the 1980s, and about political dictatorship and reform in Taiwan. The book paints a large canvas. It gives attention to the man, his family life, and his immediate relationships, but also to the general political setting. The writing is direct and clear. Taylor is good at reimagining circumstances, sometimes because he's visited the scenes and met the people. With his voracious appetite for sources and reliance on interviews, he can often bring a scene to life. Taylor is shrewd and honest at the level of particular incidents and issues, and he writes in a voice of tolerant disillusionment about human folly in general. He creates a plausible, humanly complex sense of the thinking and motivation of characters.
-- Andrew J. Nathan, author of China's Transition


Taylor tells the story of Chiang Ching-kuo's life well. The writing is clear and the relationship between Ching-kuo's family and career to the dramatic 'sweep' of the century is maintained throughout. A consistent effort is made--rather successfully--to contrast Ching-kuo's experience with that of his old Moscow classmate, Deng Xiaoping. Taylor offers a significant reinterpretation of Ching-kuo's time in the USSR, leading one to conclude that he may really have meant it in all of those Stalinistically stylized denunciations of his father, or at least in some of them. More important, Taylor makes it clear, even in an understated way, that the time in the USSR was formative, politically, for his subject.
-- William C. Kirby, Harvard University


Taiwan enjoys a booming economy and a lively, boisterous democracy. In this deeply detailed biography, Taylor maintains that Chiang Ching-kuo is largely responsible for both. Though historically still in the shadow of his famous father, Chiang Kai-shek...the younger Chiang spent a life that is itself fascinating...Of special note is Taylor's account of how Chiang skillfully read and used the changing trends of the Cold War and the post-Cold War period to allow Taiwan to not only survive but prosper...This work will long remain his definitive biography.
-- Publishers Weekly


Most historians have not been kind to the man who failed China and then ruthlessly established his presence on the island of Taiwan, which he ruled under martial law until his death in 1975...Jay Taylor tries to convince us that Chiang Ching-kuo, despite his own ruthless suppression of any opposition in Taiwan, was fundamentally a better man than his father...Following his life in this book gives one a good picture of this tumultuous period in China's history. It may also help to explain at least a little of the passion felt on both sides of the Taiwan Straits.
-- Danyll Wills South China Morning Post


Jay Taylor has written a superb, magnificently researched biography of Chiang Kai-shek's son, Ching-kuo, the man who set the stage for the democratization of Taiwan. [The Generalissimo's Son] tells the fascinating story of the man who set Taiwan on its new course, a course which seems to preclude unification with China and presents a grave danger to the peace of the world.
-- Warren I. Cohen Times Literary Supplement


The first comprehensive Chiang Ching-kuo biography in English, this very readable book is based on extensive documentary research and interviews. It is an important addition to the literature of China's (and Taiwan's) modern history and politics.
-- J. Chen Choice