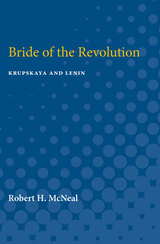 BUY
Bride of the Revolution: Krupskaya and Lenin
by Robert McNeal
University of Michigan Press, 1972
Paper: 978-0-472-75177-8
Some four years after the wedding of Nicholas and Alexandra Romanov in the splendor of the Kremlin, two obscure political convicts—Vladimir Ulyanov (Lenin) and Nadezhda Krupskaya--were married in Siberia. Twenty years later Lenin and Krupskaya were themselves living in the Kremlin, and the royal Romanovs had been shot by Lenin's police. This book re-creates for the first time the full story of the devoted and determined woman who married the greatest among European revolutionary leaders. Krupskaya's marriage was remarkable in many ways. It began with Lenin's ambiguous proposal smuggled into her jail cell, and ended in the intrigue of succession as Lenin lay dying. From close political collaboration during the early emigrant years of the Bolshevik Party, to her role in the long-suppressed story of Lenin's affair with Inessa Armand, Krupskaya proved herself a loyal bride of the revolution. Yet Krupskaya in her own right comes alive in these pages—as a youthful Tolstoyan; as an advocate of progressive education and the liberation of women; as chief cryptologist, secretary, and paymaster for the tiny network of revolutionaries; as an ultimately tragic figure, struggling to defend her husband's legacy against the machinations of Joseph Stalin. Nadezhda Krupskaya has long been revered in Russia as the greatest woman of the Communist era, yet no Soviet writer has dared to write frankly of her fascinating and turbulent life. In this book—based on extensive research in Soviet publications as well as Tsarist and Trotskyan archive materials—the author has succeeded in unraveling many of the enigmas of Krupskaya's biography, and has provided often intimate and very human glimpses of her famous relationship with Lenin. Here, for the first time, Krupskaya at last takes her place as a great figure of the modern age.