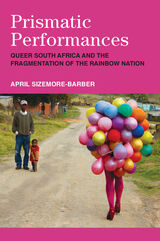 At his 1994 inauguration, South African president Nelson Mandela announced the “Rainbow Nation, at peace with itself and the world.” This national rainbow notably extended beyond the bounds of racial coexistence and reconciliation to include “sexual orientation” as a protected category in the Bill of Rights. Yet despite the promise of equality and dignity, the new government’s alliance with neoliberal interests and the devastation of the AIDS epidemic left South Africa an increasingly unequal society.

Prismatic Performances focuses on the queer embodiments that both reveal and animate the gaps between South Africa’s self-image and its lived realities. It argues that performance has become a key location where contradictions inherent to South Africa’s post-apartheid identity are negotiated. The book spans 30 years of cultural production and numerous social locations and includes: a team of black lesbian soccer players who reveal and redefine the gendered and sexed limitations of racialized “Africanness;” white gay performers who use drag and gender subversion to work through questions of racial and societal transformation; black artists across the arts who have developed aesthetics that place on display their audiences’ complicity in the problem of sexual violence; and a primarily heterosexual panAfrican online soap opera fandom community who, by combining new virtual spaces with old melodramatic tropes allow for extended deliberation and new paradigms through which African same-sex relationships are acceptable.

Prismatic Performances contends that when explicitly queer bodies emerge onto public stages, audiences are made intimately aware of their own bodies’ identifications and desires. As the sheen of the New South Africa began to fade, these performances revealed the inadequacy and, indeed, the violence, of the Rainbow Nation as an aspirational metaphor. Simultaneously they created space for imagining new radical configurations of belonging.
AUTHOR BIOGRAPHY
April Sizemore-Barber is Assistant Professor of the Practice in Women’s and Gender Studies at Georgetown University.
REVIEWS
“The depth of the ethnographic research, the sensitive, nuanced reading of multiple performance texts, and the interdisciplinary acumen make this an excellent contribution to the field of theatre and performance studies as well as the burgeoning field of queer African studies. Individual chapters, which move among and between the genres of performance art, self-performance, photography, dance, and television, culminate in a remarkable ‘prism’ of what it means to be a queer South African in the post-apartheid moment.”
—Laura Edmondson, Dartmouth College