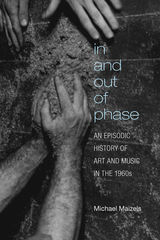 In and Out of Phase: An Episodic History of Art and Music in the 1960s
by Michael Maizels
University of Michigan Press, 2020
Cloth: 978-0-472-13193-8
Experimental artists and musicians thrived in New York, Los Angeles, and other creative hotspots in the 1960s, and those who would become major figures in the visual arts often worked closely with those who became the most recognized composers and performers of late-twentieth-century music. Yet, surprisingly little attention has been given to these connections, especially considering that such collaborations helped to shape subsequent histories of both fields.

In and Out of Phase is the first sustained look at the creative interactions between artists and musicians of this era, looking at four pairs of creators who used process-oriented ideas and techniques in their music and art: Dan Flavin and La Monte Young; Sol LeWitt and Milton Babbitt; Richard Serra and Steve Reich; and Bruce Nauman and Meredith Monk. Maizels uncovers not just the social and intellectual connections between these two groups of creators, but illuminates how the focus on repetitive actions, pattern and process, and an emphasis on “surface” created mutual influence—and stylistic change—between music and art during this period. The book’s concluding chapter briefly addresses the enduring influence of the innovations of the 1960s on more recent works.
AUTHOR BIOGRAPHY
Michael Maizels is a Visiting Researcher at metaLAB@Harvard.
REVIEWS
"Maizels teases out the complex connections between rather disparate concepts in music and visual art... this [is a] very thoughtful piece of work, that packs into its 172 pages the material of a much longer book."
—The Wire
— Andy Hamilton, The Wire