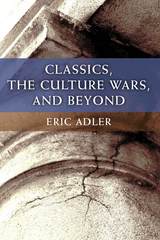 Beginning with a short intellectual history of the academic culture wars, Eric Adler’s book examines popular polemics including those by Allan Bloom and Dinesh D’Souza, and considers the oddly marginal role of classical studies in these conflicts. In presenting a brief history of classics in American education, the volume sheds light on the position of the humanities in general.

Adler dissects three significant controversies from the era: the so-called AJP affair, which supposedly pitted a conservative journal editor against his feminist detractors; the brouhaha surrounding Martin Bernal’s contentious Black Athena project; and the dustup associated with Victor Davis Hanson and John Heath’s fire-breathing jeremiad, Who Killed Homer? He concludes by considering these controversies as a means to end the crisis for classical studies in American education. How can the study of antiquity—and the humanities—thrive in the contemporary academy? This book provides workable solutions to end the crisis for classics and for the humanities as well.

This major work also includes findings from a Web survey of American classical scholars, offering the first broadly representative impression of what they think about their discipline and its prospects for the future. Adler also conducted numerous in-depth interviews with participants in the controversies discussed, allowing readers to gain the most reliable information possible about these controversies.

Those concerned about the liberal arts and the best way to educate young Americans should read this book. Accessible and jargon-free, this narrative of scholarly scandals and their context makes for both enjoyable and thought-provoking reading.

AUTHOR BIOGRAPHY
Eric Adler is Associate Professor of Classics at the University of Maryland.