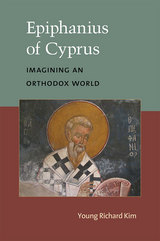 Epiphanius of Cyprus: Imagining an Orthodox World
by Young Richard Kim
University of Michigan Press, 2015
Cloth: 978-0-472-11954-7
Epiphanius of Cyprus offers the first complete biography in English of Epiphanius, lead bishop of Cyprus in the late fourth century CE and author of the Panarion, a massive encyclopedia of heresies. Imagining himself a defender of orthodoxy, he became an active heresy-hunter, involving himself in the most significant theological and ecclesiastical debates of his day.


Young Richard Kim studies the bishop as a historical person and a self-constructed persona, as mediated within the pages of the Panarion. Kim’s “micro-readings” of the Panarion present a close look at autobiographical anecdotes, situated in historical contexts, that profoundly shaped both Epiphanius’ character and how he wanted his readers to perceive him. “Macro-readings” examine portions of the Panarion that reflected how Epiphanius imagined his world, characterized by an orthodoxy that had existed since Creation and was preserved through the generations. In the final chapter, Kim considers Epiphanius’ life after the publication of the Panarion and how he spent years “living” the pages of his heresiology.


Kim brings a more balanced perspective to a controversial figure, recognizing shortcomings but also understanding them in light of Epiphanius’ own world. The bishop appears not as a buffoon, but as someone who knew how to use the power of the rhetoric of orthodoxy to augment his own authority. Quintessentially late antique, he embodied the contentious transition from the classical past to the medieval and Byzantine worlds.

"Brings Epiphanius into the light and reminds us of the
drawbacks of canonising particular authors or characters as representative of an age: no one figure, or small group of figures, deserves to be at the heart of Late Antiquity, but Epihanius can no longer remain relegated to its margins."
--Journal of Roman Studies
— Journal of Roman Studies

"Kim's study has provided us with fresh perspectives on Epiphanius that provide us with a greater understanding and a greater appreciation of the oft-maligned heresiologist and his intellectual and imaginative accomplishments."
--Theological Studies
— Theological Studies