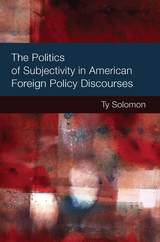 Why are some discourses more politically efficacious than others? Seeking answers to this question, Ty Solomon develops a new theoretical approach to the study of affect, identity, and discourse—core phenomena whose mutual interweaving have yet to be fully analyzed in International Relations. Drawing upon Jacques Lacan’s psychoanalytic theory and Ernesto Laclau’s approach to hegemonic politics, Solomon argues that prevailing discourses offer subtle but powerfully appealing opportunities for affective investment on the part of audiences.


Through empirical case studies of the affective resonances of the war on terror and the rise and fall of neoconservative influence in American foreign policy, Solomon offers a unique way to think about the politics of identity as the construction of “common sense” powerfully underpinned by affective investments. He provides both a fuller understanding of the emotional appeal of political rhetoric in general and, specifically, a provocative explanation of the reasons for the reception of particular U.S. foreign policy rhetoric that shifted Americans’ attitudes toward neoconservative foreign policy in the 1990s and shaped the post-9/11 “war on terror.”
AUTHOR BIOGRAPHY
Ty Solomon is Lecturer in International Relations in the School of Social and Political Sciences at the University of Glasgow.
TABLE OF CONTENTS
Contents
Foreword
Preface and Acknowledgments
Introduction
Chapter 1. Desire, Identification, and the Politics of Hegemony
Chapter 2. Identification and Hegemony in the War on Terror
Chapter 3. Desire, Discourse, and the Rise of Neoconservatism
Chapter 4. “From Near Death to Resurrection”: Neoconservative Resonance in the 1990s
Conclusion
Notes
References
Index
REQUEST ACCESSIBLE FILE