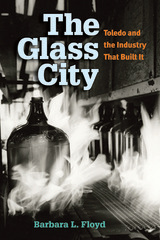 The headline, “Where Glass is King,” emblazoned Toledo newspapers in early 1888, before factories in the Ohio city had even produced their first piece of glass. After years of struggling to find an industrial base, Toledo had attracted Edward Drummond Libbey and his struggling New England Glass Company to the shores of the Maumee River, and many felt Toledo’s potential as “The Future Great City of the World” would at last be realized.


The move was successful—though not on the level some boosters envisioned—and since 1888, Toledo glass factories have employed thousands of workers who created the city’s middle class and developed technical innovations that impacted the glass industry worldwide. But as has occurred in other cities dominated by single industries—from Detroit to Pittsburgh to Youngstown—changes to the industry it built have had a devastating impact on Toledo. Today, 45 percent of all glass is manufactured in China.


Well-researched yet accessible, this new book explores how the economic, cultural, and social development of the Glass City intertwined with its namesake industry and examines Toledo’s efforts to reinvent itself amidst the Midwest’s declining manufacturing sector.
AUTHOR BIOGRAPHY
Barbara L. Floyd is University Archivist and Director of the Ward M. Canaday Center for Special Collections at the University of Toledo.
REVIEWS
". . . may be the best book on Toledo history, period."
—The Blade
— Jack Lessenberry, The Blade

TABLE OF CONTENTS
Contents
Introduction
1. In Search of Greatness
2. Boss-Town
3. The Man and His Machine
4. A Second Revolution
5. Bottles Everywhere, but Nothing to Drink
6. Building the World of Tomorrow
7. Expansion, Energy, and the Environment
8. Like Being Nowhere at All
9. Cracks in the Glass City
Notes
Bibliography
Index
REQUEST ACCESSIBLE FILE