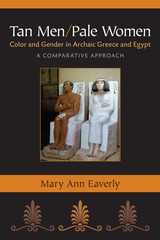 One of the most obvious stylistic features of Athenian black-figure vase painting is the use of color to differentiate women from men. By comparing ancient art in Egypt and Greece, Tan Men/Pale Women uncovers the complex history behind the use of color to distinguish between genders, without focusing on race. Author Mary Ann Eaverly considers the significance of this overlooked aspect of ancient art as an indicator of underlying societal ideals about the role and status of women. Such a commonplace method of gender differentiation proved to be a complex and multivalent method for expressing ideas about the relationship between men and women, a method flexible enough to encompass differing worldviews of Pharaonic Egypt and Archaic Greece. Does the standard indoor/outdoor explanation—women are light because they stay indoors—hold true everywhere, or even, in fact, in Greece? How “natural” is color-based gender differentiation, and, more critically, what relationship does color-based gender differentiation have to views about women and the construction of gender identity in the ancient societies that use it?

The depiction of dark men and light women can, as in Egypt, symbolize reconcilable opposites and, as in Greece, seemingly irreconcilable opposites where women are regarded as a distinct species from men. Eaverly challenges traditional ideas about color and gender in ancient Greek painting, reveals an important strategy used by Egyptian artists to support pharaonic ideology and the role of women as complementary opposites to men, and demonstrates that rather than representing an actual difference, skin color marks a society’s ideological view of the varied roles of male and female.

Mary Ann Eaverly is Associate Professor of Classics and former Chair of the Department of Classics at the University of Florida, Gainesville.