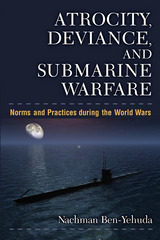 In the early 20th century, the diesel-electric submarine made possible a new type of unrestricted naval warfare. Such brutal practices as targeting passenger, cargo, and hospital ships not only violated previous international agreements; they were targeted explicitly at civilians. A deviant form of warfare quickly became the norm.

In Atrocity, Deviance, and Submarine Warfare, Nachman Ben-Yehuda recounts the evolution of submarine warfare, explains the nature of its deviance, documents its atrocities, and places these developments in the context of changing national identities and definitions of the ethical, at both social and individual levels. Introducing the concept of cultural cores, he traces the changes in cultural myths, collective memory, and the understanding of unconventionality and deviance prior to the outbreak of World War I. Significant changes in cultural cores, Ben-Yehuda concludes, permitted the rise of wartime atrocities at sea.