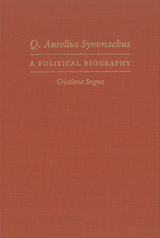 Symmachus was a brilliant orator, writer, and statesman, often flatly labeled as one of the last pagan senators. Cristiana Sogno offers a reconstruction of the political career of Symmachus through close analysis of his extensive writings, while also proposing a critical reevaluation of his historical importance. In contrast to traditional interpretation, Sogno's study demonstrates that Symmachus was primarily an influential politician, rather than a mere pagan zealot.

By portraying the individual experience of Symmachus, the book sets forth a new approach for interpreting the political aspirations, mentality, and attitudes of Roman senators. The much-studied question of the Christianization of the Western aristocracy has created the illusion of a Christian and a pagan aristocracy rigidly separated from each other. Through her study of Symmachus, Sogno demonstrates the primary importance of politics over religion in the public activity of the late Roman aristocracy. Although the book is specifically addressed to scholars and students of Late Antiquity, it will also be of interest to classicists, ancient historians, and non-specialists who wish to know more about this pivotal period in Roman history.

Cristiana Sogno received her Ph.D. in Classics and History from Yale University. Currently she is Townsend Assistant Professor of Classics at Cornell University. Visit Professor Sogno's website at: http://www.fordham.edu.

Cristiana Sogno received her Ph.D. in Classics and History from Yale University. Currently she is Townsend Assistant Professor of Classics at Cornell University.