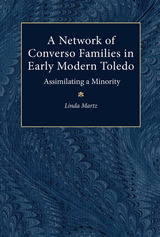 A Network of Converso Families in Early Modern Toledo: Assimilating a Minority
by Linda Martz
University of Michigan Press, 2003
Cloth: 978-0-472-11269-2
A Network of Converso Families in Early Modern Toledo addresses the fortunes of Jewish families who converted to Catholicism in fifteenth-century Spain. From the fifteenth through the seventeenth century, their careers, successes, and misfortunes are traced as they confront institutional and societal prejudices in the form of the Spanish Inquisition and pure blood statutes.
Linda M. Martz focuses on families that were immersed in the worlds of business and finance. They formed the backbone of the trade industry and, during the economic expansion of the sixteenth century, enjoyed a high degree of affluence. The seventeenth century, however, brought harder times. How these families rose to positions of commercial eminence and then adapted to this economic downturn is one of the questions addressed in this insightful book.
A Network of Converso Families in Early Modern Toledo relies heavily on archival evidence--notarial, parish, and city records--that offers new insights into the families' histories. Business endeavors, marriage alliances, involvement in local politics, and the pursuit of improved social status are all subjected to Martz's keen analysis.
These families appear to have been well integrated into their contemporary society; aside from their business and financial activities, many were members of the city's governing council. But how well did they integrate with the lower classes? Assimilating minorities in the majority culture is a task that confronts most modern societies, so the experience of Spain and this particular minority may serve as an example of how earlier societies viewed and confronted this challenge.
This book will appeal to historians of medieval and Renaissance Spain and those interested in the Inquisition's effect on Renaissance Spain. It will also prove to be indispensable for those interested in the history of the Jewish race, as well as for those pursuing the question of marginalization.
Linda M. Martz is an independent historian as well as a freelance editor and writer.
REQUEST ACCESSIBLE FILE