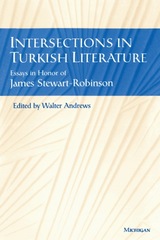 Intersections in Turkish Literature: Essays in Honor of James Stewart-Robinson
edited by Walter G. Andrews
University of Michigan Press, 2001
Cloth: 978-0-472-11218-0
The rich but often neglected field of Turkish and Ottoman literature has long suffered from the fact that a number of traditional research boundaries have separated the studies of folk and elite literature, of Ottoman and modern literature, of the village and the city, the religious and the secular.
Intersections in Turkish Literature is a collection of essays on Turkish literature by former students of James Stewart-Robinson. The topics and methods cover a broad range--from a careful thematic analysis of a traditional Turkish folktale, which reveals its resemblance to well-known Western tales; to an analysis of the "saint tales" recounted by present-day Albanian Bektasi adepts; to a study of narrative rhythm in Nazim Hikhmet's rendition of an account of a fifteenth-century popular uprising.
Walter G. Andrews has assembled the writings of a number of scholars who bridge traditional chasms, inviting us to rethink our approaches to the study of Turkish and Ottoman literature. This collection forms a nucleus that clearly demonstrates the great potential now existing for study in this area, the essays displaying a variety of unusual approaches that bring together seemingly disparate materials: the Turkish story "The Pomegranate Seed" and Disney's "Snow White"; a fifteenth-century chronicle and the poetry of a modern socialist poet; Albanian dervishes in Detroit; a modern Turkish novel; Virginia Woolf; a Yale critic; traditional Japanese poetry; and Ottoman lyrics.
Intersections in Turkish Literature will provide an important stimulus to work that reaches beyond the limits of area studies, intersecting with the interests of scholars and students of literary theory, folklore studies, anthropology, French, Japanese, and Persian.
Walter G. Andrews is Affiliate Professor of Near Eastern Languages and Civilization, University of Washington.
TABLE OF CONTENTS
Contents
Chapter 1: Intersections
Chapter 2: Telling Tales in the Mirrors of Turkish "Folk" and American "Pop" Culture
Chapter 3: Oral Muslim Saint Tales of Rumeli: A Socio-Structural Analysis of Narrative
Chapter 4: Other Selves, Other Poets, and Other Literary History: An Essay in Three Movements
Chapter 5: Rhythmic Innovation and Interpretative Resistance in Nazim Hikmet's "Epic of Sheikh Bedreddin"
Chapter 6: Halit Ziya Usakhgil's "Hikaye (The Novel)" and Westernization in the Late Ottoman Empire
REQUEST ACCESSIBLE FILE