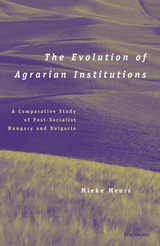 The Evolution of Agrarian Institutions: A Comparative Study of Post-Socialist Hungary and Bulgaria
by Mieke E. Meurs
University of Michigan Press, 2001
Cloth: 978-0-472-11209-8
The Evolution of Agrarian Institutions studies the unexpectedly slow and uneven growth of private agriculture in postsocialist East-Central Europe. Comparing developments in Hungary and Bulgaria, Mieke Meurs offers an explanation for this slow growth and examines its implications for efficiency and income distribution in postsocialist agriculture.
With the collapse of the state socialist regimes in East-Central Europe, it was widely expected that collectivized agriculture would quickly be remade in the glowing image of China--a patchwork of small, privately run farms yielding rapid increases in output and incomes. However, the European experience has been quite different; while socialist collective farms have disappeared, collective forms of organization have persisted, and private farming has been slow to emerge. Meurs argues that an understanding of the causes of the slow emergence of private farming is essential to effective policy intervention in agriculture. This book contributes to such an understanding through analyzing variations in farm organization and rural market development and comparing agricultural restructuring in Hungary and Bulgaria.
The Evolution of Agrarian Institutions is unique in its combination of original survey data, published data on land use, and published historical data. It also tests two institutionalist explanations for the pace and direction of change in agricultural organization. This book will be of interest to economists, political scientists, sociologists, scholars working in the area of rural development in emerging countries, and anyone with an interest in transitional economics.
Mieke Meurs is Associate Professor of Economics, American University.
REVIEWS

— American Association for the Advancement of Slavic Studies (AAASS) Edward A. Hewett Prize