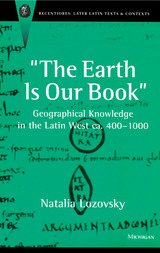 The Earth Is Our Book: Geographical Knowledge in the Latin West ca. 400-1000
by Natalia Lozovsky
University of Michigan Press, 2000
Cloth: 978-0-472-11132-9
"Early medieval geographical tradition resembles Andersen's ugly duckling. It often gets scolded and cannot find a place of its own, all because people almost invariably misunderstand its true nature." Thus begins Natalia Lozovsky's new book, The Earth Is Our Book: Geographical Knowledge in the Latin West ca. 400-1000. Filling a gap in the field of medieval studies, which has traditionally marginalized or ignored medieval geography altogether, Lozovsky explores medieval scholars' perceptions and representations of geographical space, how geographical knowledge fit into medieval society, and how this knowledge was taught and transmitted.
Tackling an impressive array of primary and secondary sources--including a variety of late antique and early medieval texts--Lozovsky examines early medieval geography as it existed in other fields of learning: theology, history, and natural science. She expounds on the use of published resources by examining the nature of geographical knowledge in the Middle Ages. She draws on unpublished sources--such as school commentaries--for the rich information they provide about geographical education during that period. For many scholars of medieval studies, early medieval geographical texts have more philological than geographical value. Lozovsky's work provides an insightful, alternative interpretation.
Those interested in history, medieval studies, ethnography, science, education, religion, Latin studies, and, of course, geography, will find this book a most fascinating read.
Natalia Lozovsky is an instructor in the Department of History, University of Colorado, Boulder.
REQUEST ACCESSIBLE FILE